TrueFire’s (and Australian) Adam Miller is kicking off his US Summer Tour so catch him live while you can! 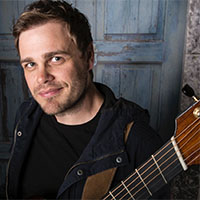 Australian Fingerstyle Champion (2002), Miller has played an array of International & National festivals including the Montreal Jazz Festival, Australian Blues Festival, A Day On The Green, Jazz In The Vines, and the Woodstock, Melbourne, and Adelaide International Guitar Festivals. He is a regular artist at NAMM (Los Angeles & Nashville) and Musikmesse (Germany) shows where he plays for some of the world’s most respected guitar companies and luthiers. He has also done two tours to Afghanistan performing for the Australian & Allied Forces.

Miller has featured in magazines such as Guitar Player, Acoustic Guitar, Premier Guitar, Acoustic UK, Australian Guitar, and Australian Musician. In 2013 his album “Delayed” was named in the top 10 Albums of 2012 by the US Acoustic Guitar Magazine. He was also named on of the top 25 Future Legends in Australian Guitar Magazine. In 2010 Miller was named “Guitarist Deserving Wider Recognition” by US based magazine, Guitar International.

Adam juggles his time between international travels & Australia where he lectures in Jazz and Contemporary Guitar at the University Of Newcastle.

He is an endorsee of Traugott Guitars, B3 Guitars, D’Angelico Guitars, Two-Rock Amplifiers, Analysis Plus Cables, Seymour Duncan & D-Tar Pickups, and D’Addario Strings.