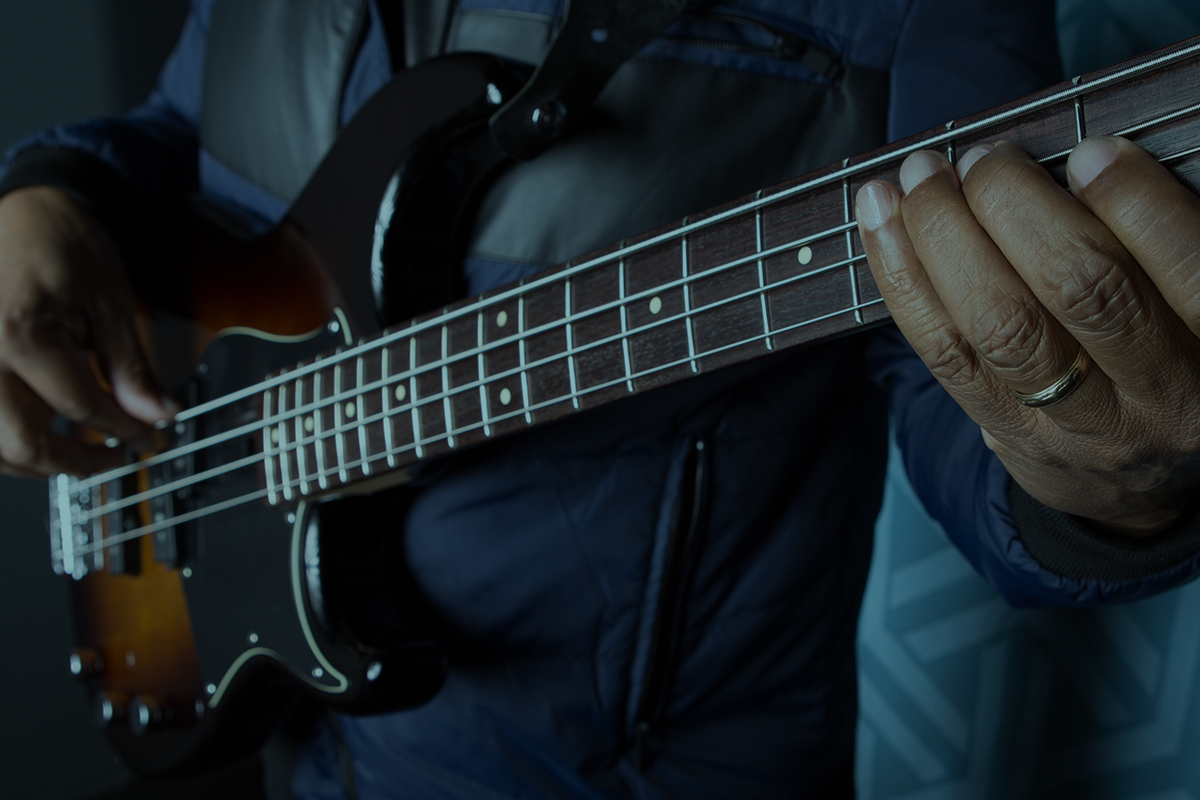 5 Rock Bass Grooves You MUST Know

When beginning your bass playing journey, a great place to start is with the bass lines from classic rock songs. These can be easily brought in to the jam, played with friends, and can be repurposed and turned into more modern sounding bass lines.

In Andrew Ford’s new bass course 30 Rock Bass Grooves for Beginners, you’ll find 30 classic rock bass lines that will get you up to speed. In these free bass guitar lessons, we’ll sample five bass lines from the course. Let’s get groovin’!

This bass guitar lesson is based on the song “American Band” by Grand Funk Railroad. This time, we’ll use an 8-bar phrase to demonstrate the beginning, middle, and end of the motif. We need all 8 bars to see how it kind of rises and falls. This one will have all eighth notes each bar, except for the last one, sticking to the root for the first half of the bar and then playing a pivoting groove on beats 3 and 4.

We start with D, playing four eighth notes on the root then moving to a D-G-A-G on beats 3 and 4. The next bar repeats this, then Bars 3 and 4 move to a C chord where we play the root for the first half of the bar using those four eighth notes and ending playing a similar C-F-G-F pivot. In Bar 5, we switch to a Bb chord again starting on the root (Bb) and then play a Bb-F-G-F pivot. It’s basically the same pivot we used over the C chord, but the notes are functioning as 5-6-5 instead of 4-5-4 as in the previous 4 bars. We have a quick chord change in Bar 6, going back to C using the root and then a C-G-A-G pivot, notice we used a C-F-G-F on the previous C chord. Bar 7 repeats our D chord pattern from Bars 1 and 2, and we end with a C chord, but our first note is D for a little variety, creating an anticipation for the listener to look for the root C that comes up on the next eighth note. We end that bar with the G-A-G pivot, different from the Bar 3 and 4 F-G-F pivot.

Now here’s a Latin rock style bass lesson in the style of “Black Magic Woman” by Carlos Santana. Here is yet another use of that dotted quarter/eighth note but in a different context. We have a Latin flavor with a little more edge and emphasis on beats two and four like you find in rock and roll. We have a 4-bar pattern with the same rhythm throughout.

In the first two bars, the rhythm and bass notes stay the same, not uncommon for this style of music in order to establish a solid foundation for dancing, for all the other instruments, and the soloist. So, in Bar 1, we have the dotted quarter on the root D, followed by the 5 (A), playing an eighth note, then we have a rolling sort of four eighth note pattern that uses the notes C, C again, D, and back to C. We call that C the minor 7th, which is used a lot when we have minor chords like we have here. As I said, the next bar repeats, and then we have a new chord (A minor) in which we play the same exact pattern but using the notes that make up the chord. That is the root (A), the 5 (E), and then that b7 riff using 2 G’s, an A, and another G.

In the last bar, we go back to G and do a slightly different pattern still starting the same with the root (G) and the 5 (D), but then flipping the riff a little by starting on the b7 (F), and going down to the 5 (D), up to the root (G), and then going up higher to the 2nd (A). This actually leads us nicely back to the D chord, since the A leads nicely to D.

Groove 11 is based on Pink Floyd’s “Another Brick in the Wall”. This groove is more staccato, a tighter bass groove, almost feeling a little bit like an 80’s rock groove, probably because it was released at the end of the 70’s. It’s a 4-bar phrase starting in D minor, in which we’ll play the D minor for the first two bars. In these bars, it’s a slightly modified dotted quarter groove, same rhythm but a little more staccato. On the first D, the root is not held as long as a normal dotted quarter note. Then, you have the rest, or silent note, then we go down to C which is the minor 7, which we already talked about being useful to outline a minor feel. After that eighth note, we go back to the root on beat 3, and take notice of the dot on top of the note, which always denotes playing notes a shorter duration than normal. Then, there’s another rest and back to the b7, C that leads to the root D in Bar 2.

In Bar 2, we play the root on beat 1 like the previous bar, then another root, and then we’re transitioning to the next chord on beats 3 and 4 by using the quarter notes A, the 5, and G, which walks nicely to our F. Anytime we can connect chords using a whole step or half step it is a good thing.

Next, we let it air out holding the F for 3 beats (notice the dotted half note), remember the dot increases a note’s value by 1/2, so instead of two beats, the length of a normal half note, this dotted one is 3 beats. On beat 4, we have an eighth note phrase using F, and then G leading into the 4th bar (our C chord). This final bar starts on the root with a half note and then does a back and forth type sequence of notes starting on C, going down to B, back up to C, and ending on C#, a very effective a colorful riff.

Groove 15 is a country flavored groove inspired by “Ramblin’ Man” by the Allman Brothers. One of the things I love about the basslines from the 70’s era in rock is that they were inspired by a variety of styles of music. This is a 4-bar phrase in the key of Ab. Again, a different use of our dotted quarter rhythm. Our counting on this bass groove moves fast because of the tempo, so practice slow and work up to tempo. The first bar is the chord Ab and starts on the root with the dotted quarter and moves to C playing the eighth note, we hold that C and follow it with an Eb. That combination of 3 notes is called a triad. We end that bar with F playing on beat 4.

The next bar has two chords (Gb to Db), starting with the Gb chord, but instead of playing the root, we play the 5 (Db) with a half note rhythm, a melodic twist, and then on beats 3 and 4 over the Db chord we play the root Db and Eb. In Bar 3, we return to the exact pattern from Bar 1, but this time it hangs on the Ab chord, allowing us to play a nice quarter note pattern using the root’s octave (Ab) on the D string for two beats and then a common pattern using the 6 (F) and the 5 (Eb) to bring us back around to the Ab. This is another major pentatonic style pattern using the 1, 3, 5, and 6 of the chord Ab.

This bass guitar lesson is based on the song “Take It Easy” by the Eagles. This is another upbeat, dotted quarter style groove that seems to have influenced contemporary country music. This is a 4-bar phrase with 3 chords, simple but effective with a good feel.

We start the first bar with a G chord and a simple dotted quarter, eighth, half note pattern using the root, G. We then go to a D chord in Bar 2, same pattern using the root (D) only. The next two bars use the chord C, so over that we can build a motif. It starts with the same dotted quarter rhythm on beats 1 and 2. Then, we have an eighth note pentatonic phrase that starts on the 3rd (E), moves to the 5 (G), the 6 (A), and back to E. Our last bar gets simple again and plays a dotted quarter/eighth rhythm using G, which is the 5, then it goes down to the E using a quarter note and finishes with another quarter using D.

If you’re looking for more classic rock bass guitar lessons, you’ll want to catch the full course on TrueFire. You’ll find 25 more bass lines to work with, and as always, the tab, notation, and jam tracks to go along with each. Check it out now!

Which Guitarist Is The Best?! – Practice & Motivation: Episode 1 – Rob Garland