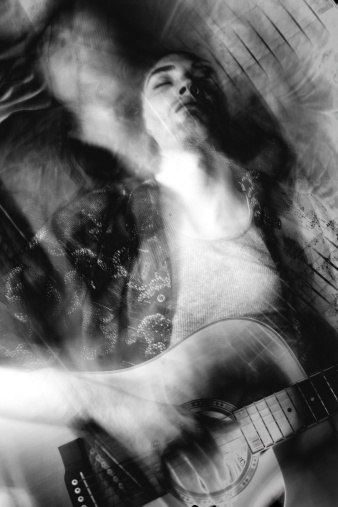 On Guitarists and “Feeling”

This was originally written as a discussion post on Reddit‘s Guitar sub-forum.

The concept of “feeling” in music has bothered me for quite some time now. From posts on message boards to discussions with friends, “feeling” continues to arise as a buzzword when evaluating musicians and their work. But where do guitarists get the idea that “feeling” is a quantifiable, measurable “scale,” or otherwise some gauging mechanism by which other musicians can assess their overall talent?

Now, I know I shouldn’t care about what other people think about my favorite guitarists, and for the most part I don’t. If you don’t like Paul Gilbert or Jon Herrington, that’s fine – I really couldn’t care less – and I have no problem moving on with my life. Opinions are opinions and everyone has the right to their own.

I take issue, however, when people start applying these imaginary hard scales of skill measurement to their playing in order to justify their dislike (or love, whatever the case) for a particular guitarist. To exemplify this: “X has no soul. He just plays fast.” Or conversely, “X has so much soul. He only plays like 5 notes.”

What I’ve learned from these last two examples, which I encounter regularly in conversation and online, is that speed is a huge factor in people’s opinions of guitarists. More specifically, the faster someone plays, the less “feel” they have. Which brings me to my point.

“Feeling” is not a scale. It’s not the product of a playing style, it’s not about the gear they use, and it’s most definitely not about the genre they play. These days most everyone will agree David Gilmour has a lot of “feeling.” I’ll say first and foremost – I agree. I love Pink Floyd, and like just about every other guitarist post-1970s, I would put Gilmour in my list of influences. But I’ve spent many a night pondering what exactly gives his playing this magical feeling so many tend to associate with him, and what distinct qualities he possesses that so many other guitarists apparently lack.

Here’s where my own opinion comes in (as if it hasn’t already), although I’m by no means the authority on this. The way I define “feeling” is if a guitarist believes in what they’re playing. This sounds slightly esoteric and quite a bit like a lot of baloney, but I truly believe that if a guitarist believes in what he plays, believes that each note he puts down is relevant to his interpretation of the music, that there’s as much “feeling” in a 15-minute, 5-note, delay-saturated solo as in a blisteringly-fast Shawn Lane solo. People are quick to say, for example, Yngwie Malmsteen has no feeling. I will concede right away that a lot of his solos are the same patterns and scales rehashed and re-ordered, and of course I don’t for one minute expect anyone to turn around and start listening to his music because of what I’m saying here. What I’m getting at, is that clearly when watching him play you can see that he is feeling and believing in what he’s playing. As far as he’s concerned, he’s pouring everything he’s got into those 5 billion notes in that 10-second time span.

Maybe he’s not the greatest example, because he’s got something of an ego and I’m sure a bit of his playing is for show, but one can’t forget that he is ostensibly the father of neo-classical shred. Big whoop, you say. I say again: it’s not about the genre, it’s the fact that he was inspired and creative enough to birth a new style of playing, and to believe in it enough and love it enough to nurture it and inspire a whole wave of guitarists.

Maybe a better example would be Shawn Lane, who seems to be among the more respected fast players (maybe the key to “feeling” is delay? I don’t know), but the point stands: both players, albeit radically different in style, believe enough in their playing to have developed their own unique styles and to apply those styles to the music they’ve written. They were clearly “feeling” it enough to be so inspired.

This is already starting to look like a Yngwie Love Post or something, and I assure you that’s not what I’m trying to say. He was just the first example that popped into my head, but I could say the same for many, many other guitarists who many write off as soulless robots. The overall point I’m attempting to make is that as far as I’m concerned, only the original guitarist can tell you definitively how much “feeling” is in his or her playing. We can conjecture, sure, but as the nature of opinions go, these conjectures can’t – and shouldn’t – be taken for gospel, which I feel like many (especially newer) guitarists do, turning them off from a lot of music before they’ve even decided what they like. One last thing I’d like to touch on is the different interpretations listeners have of what qualifies as “feeling.” There is a distinct difference between a musician feeling his or her music and an audience feeling the music. The latter is not what I have been talking about; conveying emotion through music rests as much on the listener’s receptiveness as it does on the musician. On the other hand, even if the music is largely considered the worst music of all time, or some other equally negative opinion, that is still no indication that the musician is not emotionally invested in his music – or, in other words, has no feeling.

If you haven’t guessed by now, yes, I’m a fan of fast guitar playing, and additionally, yes, I am perhaps a bit bitter that so many people are so quick to write off a lot of my favorite guitarists (although I’ve tried to keep that out of this write-up as much as possible). I could go on and talk about all the other stuff I listen to that isn’t fast (which is a great deal more than the fast stuff), but I’m not here to defend my own interests, simply to talk about this illusory scale people have blanketed over guitarists. I hope my point has been clear, and I encourage musicians and non-musicians alike to give musicians and their creations a fair, unbiased listen.