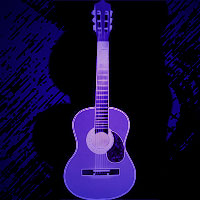 The Most Priceless Guitar In The World

The first guitar I ever had was a $50, ¾ size Gremlin acoustic. After 16 years the black paint on the fretboard is peeling off. I’ve had to Superglue the plastic bridge back to the body at least a dozen times, and the machine heads rattle whenever you play an E chord. But that little guitar can play acoustic lead and the Delta Blues like it was the second coming – the tone and resonance are absolutely divine. There’s nothing else that sounds like it which is why that guitar has been stolen from me, twice. By the grace of Hendrix, and a few bloody noses later, I’ve gotten my guitar back.

I’ve gone through a lot for that little box of Korean-made balsa wood.

But my $50 Gremlin is special and so is my humble Yamaha Pacifica. Everyone who hears them always exclaims, “what kind of guitar are you playing?!” When I tell them that they’re cheap beginner’s guitars, they’re amazed and I’m validated. It’s a good trade.

When you purchase a guitar, what you’re really paying for is an experience — an emotional experience. It doesn’t matter how much your guitar costs because it’s all about the way it makes you feel when you play it. The point is, that feeling you get is not purchased with money, it’s purchased with time and effort. No matter which guitar you have in hand, what distinguishes you from everyone else is being able to find the strength in its weaknesses.

If you can do that, every guitar you touch will turn to gold.

A Brief Look at Priceless Guitars in Music History:

1. Mayonaise
by the Smashing Pumpkins
The signature feedback “whistle” in this now classic rock gem from the early nineties was attributed to a $65 guitar. Whenever Billy Corgan would stop playing, the guitar would whistle, so they incorporated it into the song.

2. “Blackie”
A.K.A. Eric Clapton’s Guitar
Eric Clapton built Blackie using parts from 3 different Strats way back in 1970.  It cost him a total of $300 and the ax has become one of the most famous guitars in the world; selling for almost a million dollars in 2004.

3. Stella Guitars
As played by Robert Johnson
The grandfather of rock and roll played a $12 guitar. That was cheap even by Depression-era standards. Back then, Stella guitars were sold in drugstores, next to the 5 cent soda fountain.

4. Jeff Healy’s Squier
Canadian Blues-Jazz Legend
Jeff Healy made a deep groove in the blues and jazz scenes of the 1980’s and beyond with a $150 Squier Stratocaster on his lap. Enough said.

5. The “Frankenstrat”
by Eddie Van Halen
Eddie built his guitar from scratch using anything, but top-shelf parts and equipment, such as the flawed ash body. It cost him a total of $130.