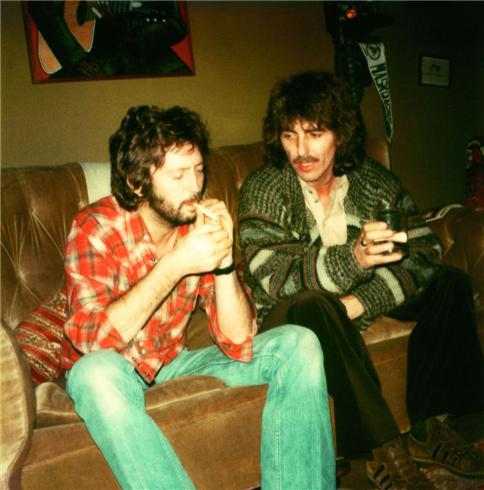 Here’s an absolute gem. It’s Eric Clapton’s isolated guitar track from George Harrison’s “While My Guitar Gently Weeps” off the The Beatles’ White Album. Didn’t know it was Clapton playing lead? It was a loosely held secret for a while, but Eric Clapton was one of the few ringers that The Beatles used on their records. Clapton was brought in because he was a close mate of Harrison’s, and since George wrote the song, he felt he had more say in who played on it.

Here are a few cool things to listen for:

1. Listen for the toe taps as EC keeps time.

2. There’s always been a question as to what gear Clapton used on the song, and none of the people at the session can remember exactly. Ken Scott (who engineered the session) told me that EC didn’t bring any gear with him, preferring to use The Beatle’s gear so he intentionally wouldn’t sound like himself. Regardless, it sure sounds like he’s using some sort of Gibson and a Marshall combo amp, although Ken says that The Beatles never used Marshalls and he never saw one in the studio. I suppose it could’ve been one the Fender’s that they used if it was cranked. At any rate, that’s one of the items that we’re trying to determine for Ken’s new book.

3. What struck me about the performance is how loose it is. It sounds like a single take as you hear EC switch between playing rhythm and lead. He never sounds sure of exactly what he’s playing though, and you can hear the odd flub, especially in the B section and the transition between sections.