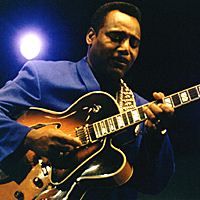 George Benson made “New Boss Guitar,” his first album as a leader, in 1964 when he was 21 years old. He already had at least three more solo records and a dozen sideman sessions with organist Jack McDuff under his belt by the time he played on alto saxophonist Lou Donaldson’s Blue Note classic Alligator Boogaloo in 1967. With Lonnie Smith also featured on organ, the title cut went on to be one of Donaldson’s big hits for the label. As he explained in an interview over forty years later, ”We made the date and we were three minutes short. I said we don’t have no more material. And the guy said just play anything for three minutes so we can fill out the time. So I just made the riff and naturally the guys could follow it. That’s the only damn thing that sold on the record. All that other stuff we had been rehearsing, our relatives wouldn’t even buy it. Music is a funny thing.” I’ll say. This lick comes from Benson’s solo on “The Thang,” an uptempo, riff-based swing tune from the same record. Read on for the full video guitar lesson…