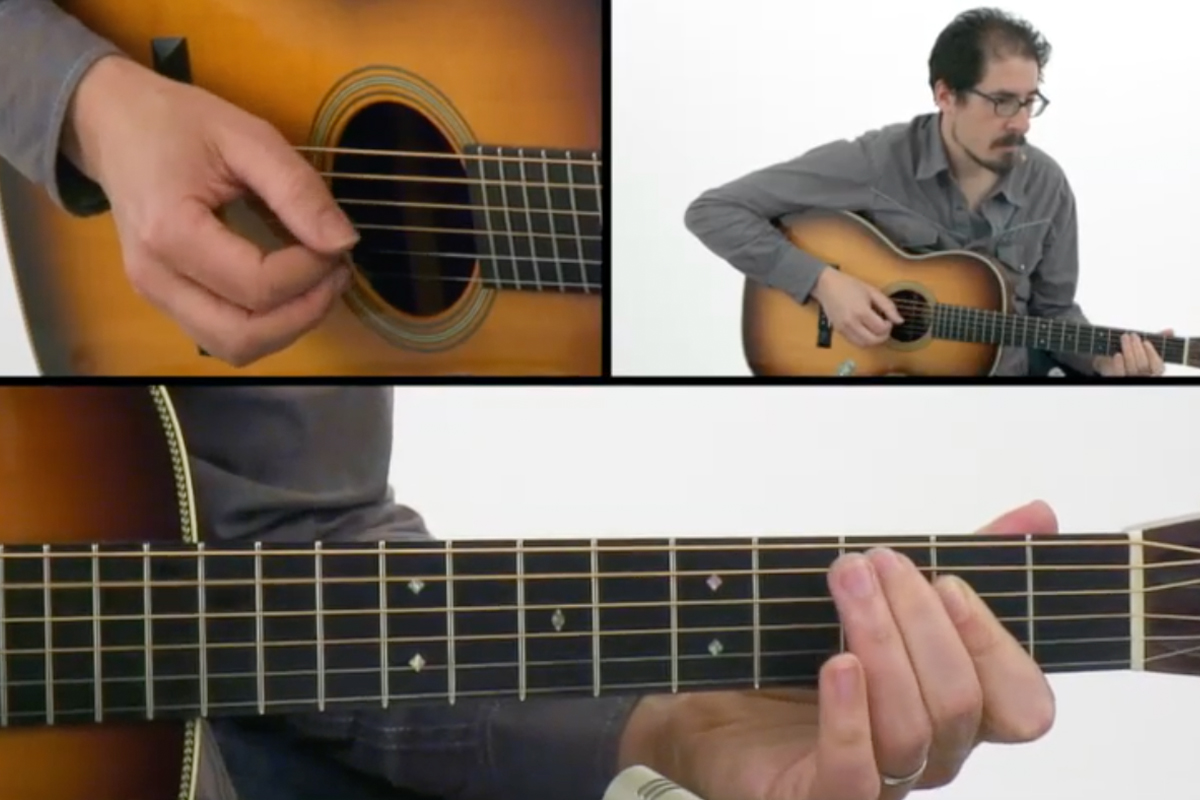 David will target ways to play over both a steady-bass and alternating thumb bass, and focus on building a vocabulary in two of the most common keys for fingerstyle blues, E and A. Along the way we’ll pick up moves in the styles of key players like Robert Johnson and Lightnin’ Hopkins, learn essential chord voicings and turnarounds, explore syncopation, quarter-tone bends and other high-end concepts.

Check out this selection of lessons from David Hamburger’s Fingerstyle Blues Factory, and by the time we’re done, you’ll have new licks under your fingers and whole choruses of fingerstyle blues to play. Hit the blues shed with David!

On beat two of the first measure, you’re grabbing all three notes of the “Rolling E7” voicing at once in a thumb/index/middle finger pinch. The b3 bass note on the third beat of measure two resolving up to the root is a cool way to change things up in the bass without disrupting the flow of the alternating thumb.

As in Merle Travis, singer, songwriter (though not an, ahem, singer-songwriter, if you see what I mean) and fingerpicker extraordinaire, composer of both “Sixteen Tons” and “Cannonball Rag,” if you can wrap your head around that for a moment. Also an inspiration to Chet Atkins and the person you’re invoking any time you mention “Travis picking.” In this case, far from playing a basic “Travis picking pattern,” we’re laying in a whole assortment of funky minor pentatonic licks over an alternating bass. Behold! It can be done. Feel free to goose those flat thirds on the high string with a quarter tone bend up towards the major third.

You can think of this lick as a kind of variation on the Hubert theme. In this case, we open with the full fingering of the B7 voicing, playing the second fret on the high string with the pinkie. The first chromatic move comes as an anticipation of the A7 chord at the end of measure one with the half-step move from C to C# (the minor and major third of A). Next there’s the move from B to Bb to A coming into the third beat of measure two (which you can look at as the 5, b5 and 4 of the E blues scale) and finally, there’s the move from G to G# at the end of measure two, resolving from from the b3 to 3 of E.

This lick starts out with the melody landing squarely with the bass before become more syncopated going into the second measure. Syncopated, for our purposes in this course, basically means landing on the offbeats – the “and” of the beat, like when you’re counting “1 and 2 and 3 and 4 and.” A less syncopated version of this lick would have us hitting the open high string at the top of measure 2, pinching it along with the F# bass on the first beat of the measure. When we play the high E string half a beat early instead, on the and of 4, we “anticipate” the downbeat, which creates the feeling of propelling the music into the next bar. Which is generally considered substantially groovier.

The title says it all. In the second measure, we use a bit of rationalizing to keep the alternating bass going beneath the descending blues scale melody. Basically, by calling the bass note on beat 2 the augmented 5th of F#7 (and therefor an o.k. “altered tone” to play on that chord) we can get away with using an open string in the bass at that point. Likewise, using the same open note on beat 4 is a bit of cheat too; it’s the #9 of B7, which is not really an ok bass note but since it resolves quickly to E, anticipating the I chord in the next measure, our ears hear it as just a suitably bluesy moment. All of which frees us up a bit to put more of our attention (and fingering) into the lick happening on top.

Right or Ronk in E2: Performance

The first line of this chorus is a good example of how to play a series of blues scale moves – complete with double stops and quarter tone bends – while keeping the alternating bass going. The A7 double-stop moves in measures 5-6 are a variation on Double Stops Up and Back; the licks in measure 7-8 are basically the same thing, transposed down to E. For the two measures of B7 we play the highly syncopated Hammeron and Slide lick before wrapping up with an alternating thumb version of the I VI II V turnaround.

Right or Ronk in E2: Breakdown

If that weren’t all enough, in the whole course, you’ll acquire a very tasty and very versatile vocabulary of licks, vamps, chord voicings and other essential moves to play over E, A, D and B chords (the 1, 4 and 5 chords for the keys of E and A). Check out the full course now!

Which Guitarist Is The Best?! – Practice & Motivation: Episode 1 – Rob Garland