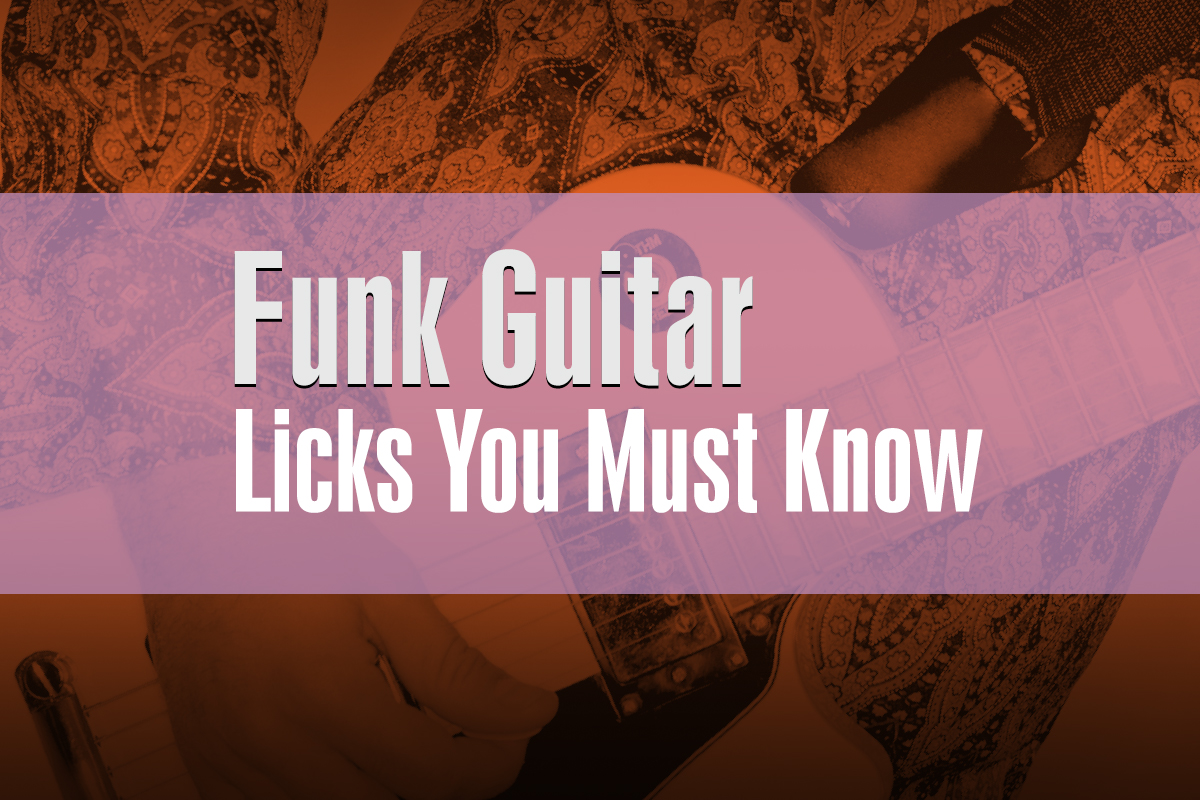 7 Funk Guitar Licks You MUST Know

These funk guitar licks are from Chris Buono’s 50 Funk Guitar Licks You MUST Know course. These handpicked phrases, concepts and techniques deliver a wide variety of classic, contemporary and underground funk styles to help guide your development of the tools, techniques and vocabulary required to majorly power up your funk chops.

Kicking things off is a must-know motif heard within countless funk moments throughout recorded history (and not just on guitar), making this truly one of THE funk licks. The lick resides within a condensed 6-bar I-IV-V in the key of Dm set to a sweet groove. While getting down with lick #1 be mindful of the many prerequisite techniques that will reappear throughout ‘ 50 Funk Licks You Must Know’ including string bending (with a special attention paid to the 1st finger bending at hand), staccato phrasing, and grace note slides. What’s more, the lick is played on two different string sets (3rd-2nd, 2nd-1st) to inspire you to shift every lick you learn around the neck for maximum flexibility in your overall lick delivery, no matter what the style.

At the end of the day you can never know enough ways to squeeze yet another slick lick from the venerable minor pentatonic scale. Taking a hint from Calvin Brown’s solo as heard in the Roy Ayer’s classic, “Spirit of Doo Do” from the commercially controversial Mystic Voyage album, this next lick is a must know in regards to subtle phrasing. From the commanding romp on the downbeat after the pickup to the Pink Panther-cool walk up the scale from said root, this A minor pentatonic idea is just a glimpse at the myriad possibilities bottled inside this five-note stalwart. If by chance you’re not down with the genius of Roy Ayers and Calvin Brown, change that before you take your next breath and prepare to wonder how you could possibly have missed the funk at this level.

In James Brown mashup #2, this lick combines the approaches to 3rds as played in “Hot Pants” and “Sex Machine”. While the former captures the vibe of the main guitar riff with its bouncing from single notes to diads in Eb, the curveball is thrown by the latter. The root-to-diad pivot lick in bars 3 and 4, also in Eb, is an idea played by the Godfather himself on piano, which has been arranged for you to play on your guitar. A good idea to get the most out of each half is to play the first four bars with a pick exclusively, and the second four with a hybrid picking technique.

Taking one last look into the concept of interval integration with a focus on the dense sounding interval of a 2nd, I give you his Funk-ness, Nile Rodgers. In addition to his stellar guitar work alongside the late bass great Bernard Edwards in Chic, Rodgers has graced many a record including the infamous Thriller. Taking a hint from perhaps one of the most sampled tunes in modern history, “Good Times”, this lick doles out some tight voice leading that thrives on the inclusion of 2nds within the voicings heard in bars 1 and 3.

Going all the way back to Lick #3, “Sugar Coo”, we had our first encounter with the great Leroy “Sugarfoot” Bonner of the Ohio Players. While the lick itself was loaded with ’50 Funk Licks You Must Know’ prerequisites, technically speaking that was a primer compared to the incendiary riffage going on this one. Looking into Players defining hit, “Fire”, you’re about to put any fleet finger pentatonic chops to the test with this Cm jam.

Once more diving into Prince’s guitar prowess this next eight bar excursion is aptly titled, as you will be going crazy over what’s contained within. Just like Lick #10, “This is Hip!”, what you have here is an instance where it would have been a crime to give you any less than this chunk of brilliant licks heard in Prince’s solo break in “Let’s Go Crazy” from the Purple Rain record. Loaded with F# minor pentatonic delights, long bends that settle into buttery vibrato, and an ending descending run in F# dorian, this one is overloaded with must know funk gusto.

In 2000, John Scofield took a big-time stylistic left turn (wonder where he learned that trick?) and went jamband by putting out two ridiculously funky records, Uberjam and Up All Night. Even weirder, he started gigging with a second guitarist named Avi Bortnick and boy, could that guy PLAY. These four bars of funk-de-force showcase a break Avi takes in a tune called “Snap, Crackle, Pop” that exudes absolute tightness. Impelled by a fierce attack on upper string perfect 4ths, you’ll rip through the B minor pentatonic scale with extreme staccato phrasing by way of bounce fretting. Do yourself a favor and check out the original recording where this lick takes influence from and check out what Avi drops after Sco’s solo break. So funky!