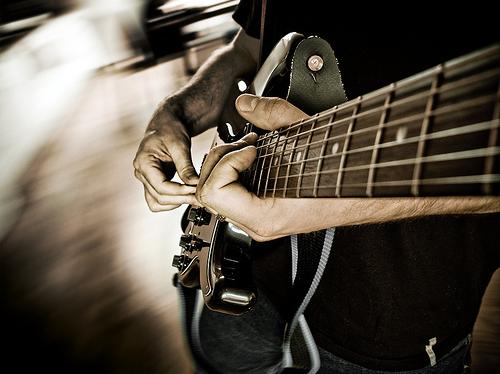 “Nothing of me is original. I am the combined effort of everybody I’ve ever known.”
– Chuck Palahniuk

Sure, we all want to be unique. We all strive to be different. We want to have fresh, original ideas. But the fact of the matter is that everything we know and everything we create is the result of learning from and observing others. That’s how life works. Knowledge is passed down generation after generation, and over time ideas evolve, which leads to invention, greater technology, more creativity, and new music.

They say imitation is the sincerest form of flattery, but it also can be one of the most effective ways to learn. Imitation is also a source of inspiration. This is especially true among six-stringers, who are broadly and deeply influenced in one way or another by their fellow guitarists.

With that said, here are 7 guitar legends worth imitating in your quest to become the next great “original” guitar player. Without Eric Clapton, we may never have heard the sounds of blues/rock, hard rock, metal and everything that came after. Born in 1945, Eric was the prime mover in the British Blues boom, first appearing as a member of the Yardbirds and releasing the essential proto-blues/rock recordings “I Ain’t Got You” and “Got to Hurry.” His move to John Mayall’s Bluesbreakers resulted in the essential recording Blues Breakers: John Mayall with Eric Clapton, and Eric’s mercurial, mind-boggling soloing on tracks like “Steppin’ Out,” “Hideaway” and “Double Crossing Time” soon earned Eric the nickname “God.” One could easily count Jimi Hendrix, Jimmy Page, Jeff Beck, and Peter Green among those deeply influenced by Eric’s early work.

Eric is known for his incredibly deft phrasing and fluid vibrato, and, though influenced by B.B. King, Buddy Guy and Otis Rush, has a distinct quality all his own. His playing is very expressive and, at times, vocal-like, but also erupts in blasts of pure virtuosity. A complete study of Eric’s playing is essential for any guitarist interested in playing either blues or blues/rock. Generally regarded as the “ambassador of the blues,” Riley B. “B.B.” King, born in Mississippi in 1925, has influenced more blues and rock guitarists than any other guitarist ever. With his immediately recognizable, vocal-like guitar solos, which cover the spectrum from sharp intensity to delicate beauty, classic one-of-a-kind vibrato and signature “B.B. box” phrasing, B.B. features his guitar, named Lucille, as the perfect foil for his expressive singing.

B.B. was influenced by blues players such as T-Bone Walker, Bukka White and Robert Jr. Lockwood, but also has an affinity for the jazz sounds of Johnny Moore, Django Reinhardt and Charlie Christian. Recordings such as “The Thrill Is Gone,” “Everyday I Have the Blues,” and “Sweet Little Angel” are prime examples of B.B.’s expertise; countless guitarists, such as Jimi Hendrix, Eric Clapton and Stevie Ray Vaughan, pointed to B.B.’s “Live at the Regal” album as one of the greatest blues albums ever recorded. Born in 1944, Johnny played clarinet and ukulele before moving over to guitar, and by the time he was 15 he was one of the hottest guitar players in Texas, cutting sessions and playing live in Louisiana clubs. Initially inspired by Jimi Hendrix and Cream to push the limits of modern blues into a form he referred to as progressive blues, Johnny’s incendiary playing makes him one of the greatest and most influential blues and rock guitarists of all-time.

One of the earmarks of Johnny Winter’s guitar style is his blazing speed and precision, as exemplified by tracks like “Be Careful With A Fool,” “Good Morning Little Schoolgirl,” “Memory Pain’ and his slide guitar tour-de-force cover of Bob Dylan’s “Highway 61.” On both slide and standard guitar, Johnny has always displayed the ability to spin brilliantly constructed, virtuoso solos that feature his advanced technical skills; a complete study of his playing style will offer aspiring guitarists a lifetime of practice in pursuit of capturing just a taste of his sound and style. Duane Allman is one of the most interesting blues/rock guitarists ever. Born in 1946, Duane had many of the same blues guitar influences as his contemporaries Eric Clapton, Jimi Hendrix and Jeff Beck, and was greatly influenced by them as well. A large part of Duane’s uniqueness comes down to the incredible freedom with which he played. With his groundbreaking band, The Allman Brothers, Duane explored uncharted musical paths with such classic songs as ‘Whipping Post,” “In Memory of Elizabeth Reed” and “Mountain Jam,” weaving jazz-like lines through his blues/soul/country leanings.

But the area that Duane stands out the most is his slide guitar playing: simply stated, no one before Duane played slide guitar with the level of controlled virtuosity that he displays on tracks like “Statesboro Blues,” “One Way Out,” “Don’t Leave Me Wonderin’” and many others. With his signature glass Coricidin bottle used as a slide and worn on his ring finger, and using his fingers to pick, Duane established a very high standard for the art of slide guitar, and his work has been emulated by countless guitarists since his untimely death, at the age of 24, in 1971. Born in 1910, T-Bone is universally regarded as the father of the electric blues guitar. He learned about blues guitar directly from two blues giants, Blind Lemon Jefferson and Leadbelly. He was one of the genre’s first electric players, and claimed that he got his first electric guitar as early as 1935. His 1947 recordings of his compositions “Call it Stormy Monday” and “T-Bone Shuffle” are among the most important and most influential blues recordings ever made, and have since become “standards” for all blues and blues/rock guitarists.

With his amplified electric offering greater volume and sustain, T-Bone was able to emulate the solo lines of saxophones and other horn players in his flatpicked single-note solos. T-Bone was one of the first guitarists to use string-bending as a major component in his approach, which was a prime influence on B.B. King, who has stated that it was T-Bone’s solos that made him want to play blues guitar. He also was a virtuoso soloist, spinning out fast and complex jazz-like lines using alternate picking much of the time. Born in 1944, Jimmy played skiffle music as a young teenager and was intrigued by everything from Scotty Moore’s playing with Elvis Presley, James Burton’s with Ricky Nelson, Cliff Gallup with Gene Vincent and the Blue Caps and the great Les Paul. Combine this with his equal interest in Celtic folk, Indian and Arabian music as well as the blues work of Otis Rush, B.B. King, Albert King, Freddie King, Robert Johnson and Elmore James, and you’ve got a musician with great depth and many facets to his musical personality.

Jimmy’s guitar playing displays many of the same signature elements as Eric Clapton, but he has a distinct sound of his own. Though Jimmy doesn’t display the virtuoso touch of Clapton, his solos are all very expressive and fiery, good examples being “Good Times, Bad Times,” “Since I’ve Been Loving You” and the incredible “Stairway to Heaven.” He relies primarily on standard blues scales and riffs, but often throws in unusual intervals or rhythmic phrases that give his playing it’s own flavor.

Albert King is one of the most fiercely individual guitarists that ever lived, in any genre of music. Part of the uniqueness of his style stems from the fact that he took a right-handed guitar and turned it upside down and played it lefty; additionally, he tuned the strings down a full step and a half, making them very slinky and easy to bend, as string-bending is one of the most important elements in his approach.

Albert’s style is deceptive in that it sounds way simpler than it really is: he had a horde of stock licks and phrases that he relied on, but he never, ever sounded predictable, always mixing up his improvised riffs with pure inspiration and intensity. He often bent the strings one and a half, two and two and a half steps—known as “overbends”—and would also bend multiple strings at a time, creating a thunderously expressive sound. It is these types of licks that influenced the likes of Jimi Hendrix, Stevie Ray Vaughan, Eric Clapton and Buddy Guy the most.