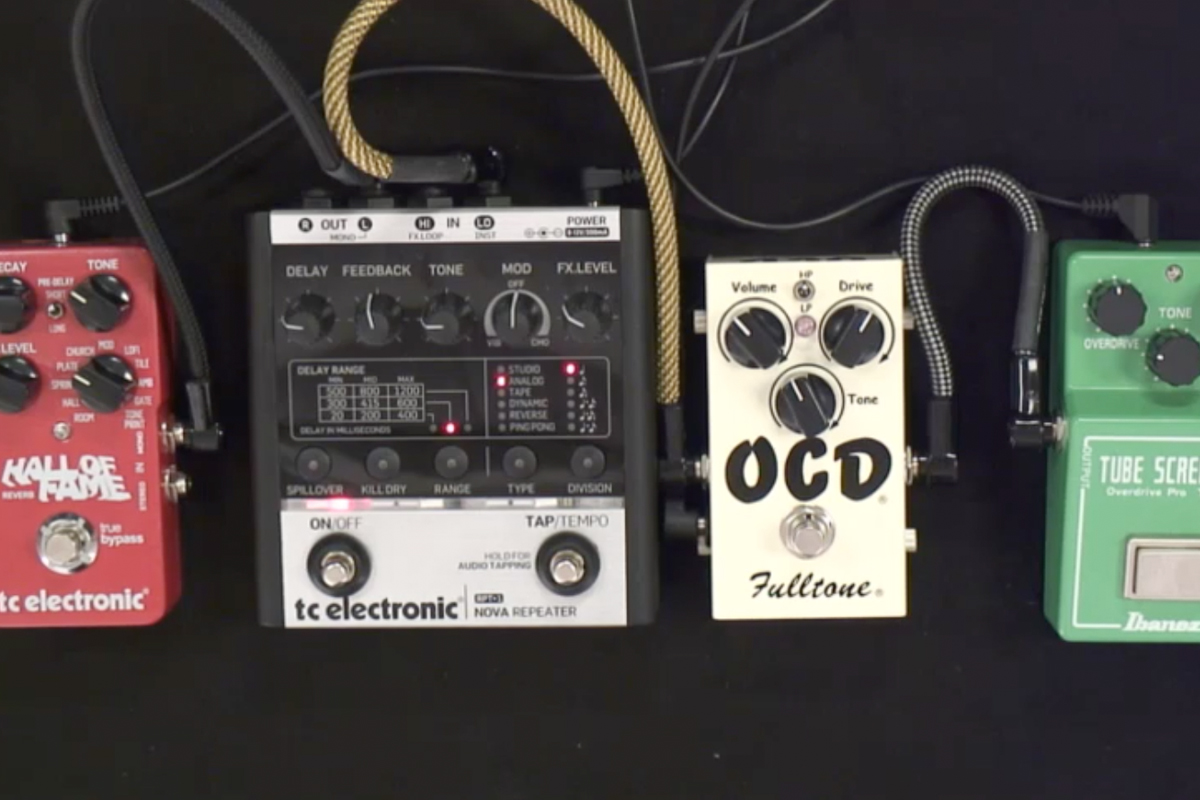 Your effects sensei Jeff McErlain is a tone hound from the word go. Over the past 30 years, McErlain has chased down the effects, chains and parameters that power the entire rock, blues and pop tonal spectrum. Jeff can tell you how to easily replicate virtually any tone with the pedals, amps and guitars that you likely already have in your closet. Jeff drills down deep on the parameters, settings, sonic qualities and applications for 16 essential pedals; Boost, Overdrive, Distortion, Fuzz, Octavia, Reverb, Analog Delay, Digital Delay, Tremolo, Chorus, Flanger, Univibe, Phase Shifter, Compressor, Volume and Wah.

Also see: 16 Guitar Effects Pedals Every Guitar Player MUST Have

Check out this selection of lessons from Jeff McErlain’s Guitar Effects Survival Guide to help you generate a massive and highly versatile sound palette. Game on!

There are so many effect pedals out there and chatter on the Internet about the right and wrong way to do things. The first thing I would say is to experiment with whatever you want, it’s not like you are going to hurt yourself! Also some of the coolest guitar sounds out there were produced by some guy saying “what happens if I plug this pedal in here”? For this course I have chosen sixteen classic pedals to work with. Before we get into multiple effects and pedal chains, let’s dig into each pedal individually. I’ll show you what the pedal does and how to tweak it to help you get the tone you hear in your head or on your favorite recording.

The term overdrive refers to when a tube amp is driven past its range to supply a clean tone. This is something we as guitar players have come to love and seek out. A common question is “what is the difference between overdrive, distortion, and fuzz as the terms have become interchangeable?” The short answer is not a lot, just one is more extreme as we go down the line. Overdrive can be subtle and produce warm slightly overdriven tones, think SRV. Distortion is easy to see as simply more overdrive, these tones are more saturated and compressed. The spectrum of overdriven tones is huge, from BB King’s slightly overdriven tube amp tones to Eddie Van Halen’s cranked Marshall, to Metallica’s thick distortion, to Smashing Pumpkins’ fuzz tones. It is all actually the same idea in a general sense, these tones may be gotten with amps, pedals, or a combination of both but it is all the same idea, overdrive.

What was considered a heavy distorted tone in the 70’s is tame to the metal sounds of today. The Ibanez Tube Screamer is the industry standard for overdrive pedals. Kicked into legendary status by the late great Stevie Ray Vaughan. The Tube Screamer TS808 was first released in the late 70’s and now catches a small fortune on the vintage market but fortunately there are reissues and many boutique clones out there. The Tube Screamer is not the only overdrive circuit of course, there are many excellent options, it is just clearly the most famous. What makes the TS so cool is the way it interacts with an already overdriven amplifier. It can add a nice amount of gain, sustain, and tonal shaping options. They do provide a bit of a boost in the mid frequencies that many people love as it helps to cut through a band. The list of TS users is extensive but Stevie Ray is the most notable.

The fuzz pedal is one of the earliest stomp boxes on the market. A very simple circuit the fuzz box altered the guitar’s signal by transforming it into a square wave. The first widely available fuzz was the Maestro Fuzz Tone by Gibson. The Fuzz Tone pedal was released in 1962 and didn’t really catch on until Keith Richards used one on the opening riff of “Satisfaction” and the floodgates opened. Another definitive fuzz pedal of the late 1960’s was the Sola Sound Tone Bender made famous by Jeff Beck and Jimmy Page. You can hear one all over Led Zeppelin’s debut record and all over Jeff Beck’s trademark “Heart Full of Soul” intro riff from the Yardbirds. He also used it extensively on the Jeff Beck Group sessions. Of course the most famous fuzz pedal is the Dallas Arbiter Fuzz Face. This pedal was favored by Jimi Hendrix and set the benchmark for fuzz tones that we are still chasing to this day.

There are two distinct kinds of transistors used in fuzz pedals, germanium and silicon. In the early 1960’s silicon transistors were fairly new and very expensive and germanium was the norm. Germanium transistors are susceptible to temperature changes and noise so they can be unreliable at times. They do have a very distinct tone, they also react very well to the guitar’s volume knob by cleaning up very well. As silicon transistors became less expensive they largely replaced their germanium counterparts in pedals due to their stability. The Silicon fuzzes generally produce more gain but often don’t clean up as well. As a lover of fuzz pedals myself I have both kinds and find uses for them, they sound different and excellent. Other famous fuzz users are Eric Johnson, David Gilmour, Joe Bonamassa, and Stevie Ray Vaughan to name a few. When shopping for a fuzz, try to play as many as you can next to each other, even of the same model. Due to the transistor values the same model pedal can sound and feel very different from pedal to pedal.

In the late 70’s digital technology boomed and made its way into the guitar community. It first entered in the form as rack units which were expensive and relatively large. As costs came down and the technology shrank, digital delay pedals were introduced into the market by Boss in 1984 with the Boss DD-2. Since then as technology advanced, delay pedals now offer many features in a very small box such as tape echo, analog, reverse delay, modulated delay, and loopers. The main difference between analog and digital delays is delay time and note clarity. Digital delays can produce multi second delay times whereas the Deluxe Memory Man offered a delay time of 550ms. Digital delay units also introduced the tap tempo function which is extremely useful when using delay as a rhythmic tool. There are many excellent companies producing excellent delay units, certainly a ground breaker was the Line 6 DL4 which is still popular today. Although I love the sound of a true analog delay, the latest offerings from companies like TC Electronics and Strymon offer so many options and analog emulation options it makes it a tough sell to stick with analog delays.

A question I get asked a lot is where I put certain pedals in my effects chain. This is very important to getting certain sounds so the answer may change. It is improtant to know that certain pedals really need to be at the end of your chain to sound best, such as reverb. Other pedals like chorus and flangers can go before or after overdrive, it depends on what sound you are looking for. So there is a lot of experimenting that can be done. Nothing is written in stone but here is what I like: guitar – fuzz- tuner- mod – od – delay- rev. That is a basic setup that I would use that gives me the classic guitar sounds I love so much! So much of the fun with pedals is trying things out. For example a delay before od isn’t always optimal, but if you tweak it right it can sound very cool, just ask Eric Johnson!

I am channeling Jeff Beck on this effect chain as well as David Gilmour. A compressor can do wonders for a clean sound, especially when playing lead. It’ll give you a nice punch to the notes as well as increase your sustain. The reason for this is because compression gives you many of the characteristics of playing with an over-driven tone but without the overdrive. Excellent examples of clean compressed lead tone are “Where Were You?” by Jeff Beck and “Another Brick in The Wall Pt 2” by Pink Floyd.

Delays are a ton of fun because we can play with rhythmic subdivisions of the delay. In this case I am using a triplet figure on the repeats to create a cool reggae sound. It may take a minute to get it right but it’s a ton of fun once you do. A great tune you can check out for a great use of this effect is “Power Of One” by Daniel Lanois. Lanois, is a very well know producer/performer credited with being a major force behind U2 and Peter Gabriel. Well, he did produce Joshua Tree, Achtung Baby, and All You Can’t Leave Behind from U2 and Us and SO from Peter Gabriel. Oh yeah Dylan, Emmylou Harris, and a few others. I highly recommend his solo records.

Gain staging is a fancy way of saying stacking output sections of pedals to help push the other one into overdrive. Guitar players have been doing this for decades and it is essential to any great over-driven guitar sound. High gain amps like Bogners, Soldanos and Mesas gain stage internally by adding extra preamp tubes and cascade one into another. If we are playing through a medium to low gain amp or pedal we can get the same effect by placing another gain pedal in front of that amp or pedal. The most famous pedal for this is the Ibanez Tube Screamer. Check out the overdrive tutorial for an in-depth look at this. As I show in this video, experiment with output levels vs. overdrive levels to push the front end of your amp or pedal. They can have a dramatic effect on the sound, feel, and volume of your tone. Also, tweaking the tone knob or knobs on your pedals can make or break the tone. There are many variables so it really takes a lot of experimentation to dial in the right sound for you. But hey, that’s part of the fun!

There’s a more definitive resource in the full course. Plus, every pedal and effect chain video tutorial also features text guides and graphic schematics depicting the pedals used in a particular chain, the order of those pedals, and the exact settings used in the tutorial. Plus, an interactive schematic creation tool is also included with the course so that you can record and print out your own chains and settings. Worth the price of admission alone! Check it out…