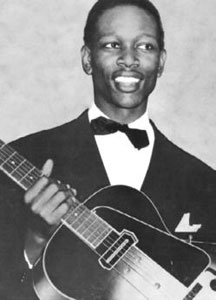 Charlie Christian: Going to the Source

Charlie Christian was an unabashedly guitaristic player. Hot to go with one of the first commercially available electric guitar and amplifier rigs from Gibson, Christian cranked out burning blues riffs and proto-bop licks with impeccable tone and timing. In just two incandescent years with Benny Goodman’s sextet at the turn of the 1940s Christian established himself as the definitive jazz six-stringer of a generation before succumbing to tuberculosis at the age of 23.

Whether with Goodman or at after hours sessions at Minton’s in Harlem, Christian’s astonishing eighth-note lines careened their way through routine cycles of dominant 7th chords with off-kilter chromaticism and upper extension 9s b9s, and 13s while his vamping, riffing and other blues ideas show a sure-footed, swinging sensibility and unflagging energy.

Charlie Christian’s music is the perfect remedy for any guitarist fearful of committing jazz. He favored a handful of fretboard shapes, and each one can be seen as an up the-neck version of a familiar chord voiced on the top four strings. While his ideas were hardly simplistic, Christian didn’t so much play scales or arpeggios as work from guitaristic major chord shapes, adding in the 6s 7s, and 9s that sounded good to him and connecting it all up with some slinky chromatic passing tones. Once you see how Charlie visualized these shapes up and down the neck, you can do it too, and save those three-notes-perstring, three-octave arpeggios for another day. Right now, let’s go to the source and see what licks we can glean from the father of swingin’ jazz guitar, and then look at how he would put them together into phrases and ultimately, entire solos.

Read on for the full guitar lesson including audio, tab, charts, and more…

Click here for the power tab for this guitar lesson.

Chord Shapes
Ex. 1 a shows the top four notes of a barred E chord. To this fundamental sound Christian added in the 6 and the b3 (Ex. 1 b) in order to swing in a I-chord situation, usually a major-6th chord.

Ex. 1 c shows how Christian tweaked this same basic shape into a dominant -7th, -9th or – 13th sound by keeping the 6, adding in the b7 in two places, and including the 9 on top.

You can think of Ex. 1 d as the top four strings of a barred 07 chord. To this shape Christian adds in the 9 in two places and usually only plays the bB (on the G string) during descending licks (Ex. 1 e) .

Ex. 1 f shows the top four strings of a barred C chord, another shape Christian uses primarily over a I chord. Ex. 1 g shows how he adds a 6 (and a high 5) to the basic chord shape.

Finally, Ex. 1 h is the top four strings of a familiar 9th~chord form. Ex. 1 i shows how Christian adds the 5 on the D string and the 6 (or 13) on top, making this another shape that works over dominant-7th, -9th and -13th chords.

First Moves
Examples 2a-2d are a collection of moves using the notes shown in Ex 1b. They may look and sound familiar in a T-Bone Walker or B.B. King kind of way.

Examples 3a-3d are in the same position but with the dominant-7th scale tones of Ex 1c added in. Starting off with the low b7 and jumping to the bB is a characteristic Christian move, as is jumping past the root to hit the 9 on the high string.

With Examples 4a-4d we get into more Christianesque territory. Our man invariably smooths things out with the chromatic passing tone from the 9 to the root, as in the first three riffs. To finger Examples 4a and 4b, you want to get that D at the 7th fret as a stretch back with your 1st finger before returning to position with your 3rd finger on the 10th fret.

Ex. 5a gives us an “upper position” in which to get some of the same major-6th moves as in Ex. 2. The 4-b3-bB embellishment in Examples 5b and 5c is a favorite Christian move. He also grabs the 6 and/or the 9 in all of these examples and kicks off Ex. 5d with the slick chromatic descent of 5-j,5-4-3.

If you’ve ever camped a 9th chord you’ll recognize the outline of the licks in the next examples. What’s particularly inventive is how Christian turns this familiar chord shape into a linear sound. Ex. 6a is the basic arpeggio, Ex. 6b is a busier triplet version that finds time to include the b3 and the root on the Band G strings as well. Ex. 6c offers the same chromatic move as the beginning of Ex. 5d-5- b5-4-3-as a kickoff on the fourth string (try using all downstrokes to get from the F to the high G’). Ex. 6d begins with the chromatic move root-7-b7. Implications
The harmonic landscape was a little simpler in the swing era; in fact the playing of Charlie Christian and some of his fellow forward thinking “modernists” initiated the top-down trend towards the bebop era’s chord progressions. What made Christian’s playing so revelatory was that, when soloing over the straight-forward changes in Benny Goodman’s group, Christians implied much more-in fact, implied the kinds of changes that soon began turning up in the compositions of Dizzy Gillespie, Charlie Parker and others. Let’s check out how Charlie runs the changes by looking at his moves over a few bars at a time.

Examples 7 and 8 show Charlie’s angle on a II7-V7-I. In both examples, note the characteristic move in the second bar: On the V, Christian liked to duck down two frets to spell out a descending IVm triad-against the V this gives him the 11, b9 and b7 as a lead-in back to the I. Ex. 9 shows another set of positions for a similar kind of II7-V7-I7 situation, kicking off with a dominant-9th arpeggio.

Ex. 10 can be heard as a I-IV VI-II, II-V or V-I change; however you slice it, it’s typical of the kind of lines Charlie would run on the bridge of a tune like “Honeysuckle Rose” or Sextet originals based on “I Got Rhythm” like “Seven Come Eleven.” The shape of the opening line looks a little like the top of an open-position A7 chord moved up the neck.

Taking It Home
Now let’s look at a 32-bar solo a la Charlie to see how all of these various elements come together. Ex. 11 shows a chorus of “Rhythm” changes closely based on Charlie’s solo in “Flying Home.” While the A-section changes to Swing-era tunes like this may look formidable, many musicians of the era simply treated these changes as vamps over which to blow blues licks. With such an approach there are suddenly vast open spaces to fill, and phrasing becomes key. In contrast, it’s clear why some jazz folks refer to the B section as the “release”; it’s a relief to have to channel your thoughts into a different chord change every two bars after 16 bars of vamping on the I. Christian makes the most of this opportunity for contrast by opening with a series of major-6th phrases so evenly placed as to have an almost vocal quality. He punctuates the start of his second A section with a particularly cool b3-6 double-stop.

At the bridge, Charlie unleashes a solid wall of eighth-notes, and yet pauses for breath before kicking off the second four bars–a major phrasing concept. Dig in particular the monumentally chromatic descent over the F chord that takes him down into the 1st-fret position in the blink of an eye. The final eight bars include a half-step reverse bend, a brief glimpse of the future that electricity will bring to the guitar.

Once you begin to grasp how Christian assembled his vocabulary into a bigger musical picture, try improvising over these chord changes by swapping in other moves from the examples above, or applying these moves to similar tunes. Using Christian’s “mini-chord” approach can ultimately serve as a route not only to the stylistic nuances of the swing era, but to a better understanding of the guitar itself.