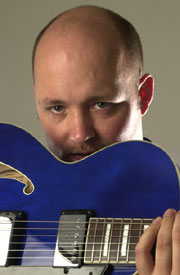 Chances are good that when Jimi Hendrix was playing timeless blues intros like the opening notes of Red House – he wasn’t consciously thinking.

I’m now fretting the interval of a major sixth for two beats and then moving it down a half-step. But like great blues players before and after him, Hendrix used intervals of major or minor sixths all the time because these grips- when played with passion and conviction-have a mesmerizing, open sound. While Ex. 1 may be one of the most popular sounds in the history of the blues, an equally tasty but less common example of a blues-inflected sixth is shown in Ex. 2. Hendrix sometimes played this lick when approaching the IV chord of a slow 12-bar blues in G.

This lick gets its savory flavor from the minor sixth that occurs between E and C, just before C slides down to Bb. To ensure this meaty maneuver has a huge emotional impact, play it not just with your fingers, but also with your heart-as well as a warm, biting tone and a lyrical vibrato. major and minor sixths was because he absolutely killed the notes with his pick. Learn these and three other blues sixths licks in this ear-opening lesson from Jude Gold.