A great way to organize your improvised solos is with the use of “Call and Response”, also known as “Question and Answer”. This is one of my favorite things to do when soloing and improvising — in fact, its probably one of the most common approaches for crafting sections of a solo. I’ll show you ways to approach this technique. Enjoy! 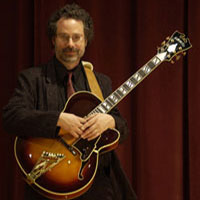 Christopher is a jazz guitarist and composer living in Portland, Oregon. He performs a wide range of jazz styles, from Dixieland to Free jazz, Ragtime to Bebop. His compositions reflect his diverse musical tastes and abilities, and combine the intricicies of Baroque counterpoint with the freedom of modern jazz. Christopher has played with many nationally and internationally known artists, including Bernadette Peters, Rich Little, Hank Roberts, Bob Mover, Tony Monaco, Mel Brown, and John Stowell. He regularly performs throughout the Pacific Northwest, and at jazz festivals in the U.S. and Canada.

Guitar Lessons for Seniors: Why It’s Never Too Late to Learn (or Try Again!)