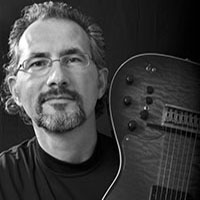 Tom has been performing for over 30 years – playing in ‘garage bands,’ school bands, and in church. He first began performing professionally at the age of 17. Shortly after, Wolfe was accepted into the Jazz Studies Program at Capital University. There he studied guitar with Stan Smith and Tom Carroll. Soon after his enrollment in the program, his teachers began to recommend him for gigs when they were unavailable to play. In a very short time, Wolfe had begun to perform with artists such as Bob Hope, Englebert Humperdink, Chita Rivera, Jerry Van Dyke, Rosemary Clooney and touring shows such as Grease, Annie, etc.

Best Guitar Podcasts: The 25 You Must Listen To In 2022 to Improve Your Playing