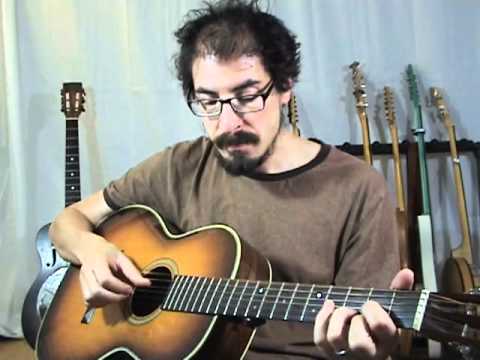 I first heard “I’m Gonna Move To The Outskirts of Town,” titled simply “Outskirts of Town,” on Buddy Guy’s 1972 LP Stone Crazy. Out of print for a time, and then made available in the ‘90s on the Alligator label, Stone Crazy has long been held up by my pal and blues sensei Carlo Rotella as one half (the other being A Man and the Blues) of the twin tablets of Guy’s solo oevre, the essential Buddy, one of two records of his you’d take to both a desert island and to a Harvard symposium on the developing role of the electric guitar in postwar blues. Not to mention the best record on which to hear Buddy exclaiming “arrrrrh!” between licks. “Outskirts of Town” is just one slow blues on an album that also includes “Are You Losing Your Mind?” and “I Smell A Rat” (the latter with the drop-dead opening line “I smell a rat, baby – I think he’s walkin’ ‘round my house on two feet.”)

In light of all this, it’s even more startling than usual to dip back to 1936 and hear the first recording of this song, by slide guitarist and singer Casey Bill Weldon. Weldon belongs to that minority of bluesmen who played or play slide lap-style, and he did it with band accompaniment on “I’m Gonna Move To The Outskirts of Town.”

What happened relatively soon after that was one of the best things that could happen to any song in the 1940s – it was picked up and recorded by Louis Jordan just as Jordan’s career as one of the most successful hitmakers in American popular music was taking off.

Jordan being one of B.B. King’s great idols, the song was in turn recorded by King, but equally storied bluesmen including Big Bill Broonzy and Jimmy Reed turned in versions as well.

Jordan’s popularity and success as a gifted singer and saxophonist with a talent for writing and delivering jivey, clever songs in the jazz- and blues-fusing style he largely pioneered, jump blues, makes it unsurprising to find musicians as diverse as Reed and jazz saxophonist Ben Webster playing the tune. In this Sixties session done for Jackie Gleason’s TV show, the Duke Ellington alumnus Webster joins singer Jimmy Witherspoon in an unusually uptempo version. (Reed’s version, in contrast, is remarkably downtempo considering the generally sunny disposition of Reed’s catalog.)

That Albert King covered the tune perhaps made it inevitable that “Outskirts of Town” would make it into the rock or blues-rock world – or at least that Stevie Ray Vaughan would one day be heard taking a shot at it in company with King. I leave to you what to make of King choosing to file his nails during Stevie’s second solo.

A couple of decades earlier, however, the song was already part of the Allman Brothers’ 1970 set at Ludlow Garage, and you can hear them applying some of the same moves to “Outskirts” as they do to their more enshrined repertoire from the Fillmore East recordings: the double-timed organ solo on “Outskirts” echoes a similar arranging move on “Stormy Monday,” and Gregg makes use of some similar backup riffs on both tunes as well.

For some reason, I find these sorts of discoveries weirdly reassuring and a little disappointing at the same time. Disappointing that the double-time moment on “Stormy Monday,” which I still find so thrilling after hearing it so many times, wasn’t some super-spontaneous six-way stroke of luck that night, but reassuring, that these guys worked out some of their ideas like anyone else, and used them where they needed to. Granted, they were really cool ideas – like the turnaround they built into their version of “Outskirts,” making it more their own in the process, but, at certain moments at least, worked out ideas nonetheless.