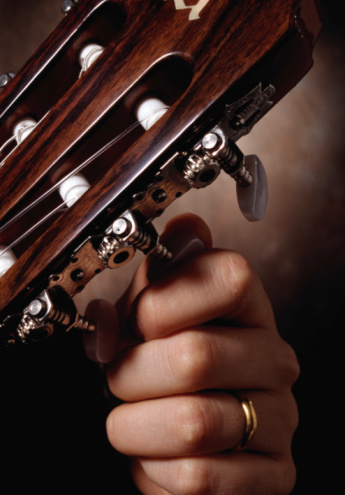 The Secrets of DADGAD Open Tuning

by Andy Ellis and Laurence Juber

“I use DADGAD for about 50 percent of my music,” says fingerstyle wizard Laurence Juber as he coaxes his Martin into the exotic altered tuning. “It opens up dimensions on the guitar that aren’t accessible in standard tuning. Because it leads me in intriguing compositional and arranging directions, DADGAD has become the centerpiece of my concerts and recordings. I think of DADGAD as my ‘other’ standard tuning.”

The pioneering Davey Graham is hailed as the father of DADGAD. A key figure in the early-’60s British folk music scene, the fingerpicker was known for injecting jazz, blues, and North African sounds into traditional Celtic music. Bert Jansch, John Renbourn, Martin Carthy, Jimmy Page, Pierre Bensusan, Michael Hedges, and Martin Simpson are among the many guitarists who seized on Graham’s innovative tuning scheme and incorporated it into their own work.

In this guitar lesson, Juber—one of the world’s foremost DADGAD authorities—makes the potent tuning so accessible that in a matter of minutes, you’ll be drawing mysterious runs and shimmering harmonies from your electric or acoustic 6-string.

Getting Launched
“First off,” says Juber, “compared to standard, DADGAD is a dropped tuning. Lower your sixth and first strings a whole-step to D, then lower your second string a whole-step to A, and you’re there [Ex. 1].You’ve only changed three strings. Assuming we’re in the key of D, the third and second strings are adjacent scale tones—G and A. This simple fact allows you to easily play scale fragments and melodies using combinations of fretting notes and open strings for a harp-like sound.

“For instance,” Juber continues, “try this simple passage [Ex. 2a]. If you keep holding the F# while you pick the open G and A strings, you’ll hear three adjacent scale tones ringing against each other. It’s dissonant, but beautiful. The hammers and pulls make the fretted notes sound more fluid and help you play fast phrases, like this one [Ex. 2b]. Remember, try to keep the open strings ringing as you work your way across the fretboard.”

As you play through this example, you’ll quickly discover the two sets Juber is referring to: D, C#, and B, played on strings one, two and three, and A, G, and F#, found on strings two, three, and four. To make the most of this “one-scale-tone-per-string” approach, arch your fretting fingers to allow each plucked string to vibrate freely, and hold the fretted notes as long as you can before releasing the string. If you’re careful, you can extract yet another set of ringing scale tones—B against A, on strings three and two. This pair acts as the hinge between the triple-note sets.

“In certain positions,” Juber reveals, “you can get four adjacent scale tones, like this [Ex. 4]. Here, I’ve refingered B and C#, so I can play in the fourth position.”

The four scale tones—E, F#, G, and A—lie on the fifth through second strings. Take advantage of the ringing open A string in beat two: During that eighth-note, release your previous grip and simultaneously clamp your 4th and 1st fingers on E and F# (strings five and four), where they’ll remain until the pull-off at the end of the measure. If you pick this phrase cleanly, your guitar will sound like pealing bells.

Omnipresent Octaves
“In DADGAD, says Juber, “octaves are immediately accessible.You’ve got three D strings and two A strings, which puts octaves on the same fret across three different string groups. A bluesy line like this is easy to finger in DADGAD [Ex. 5], once you see the octave relationship between strings four and one, five and two, and six and four.

“It’s easy to translate octaves into riffage. For example, a tune of mine called ‘Colbalt Blue’ [from The Collection] opens with this riff in D minor [Ex. 6]. It’s composed of octaves, and I fret and attack it using only one hand.” Thanks to the hammers and pulls, this swinging riff makes a superb fretting hand workout. To make the line groove, tap the octaves at the 2nd, 3rd, and 5th frets with enough force to make them louder than their companion pull-offs.

“Here’s another octave riff,” says Juber, playing Ex. 7. “It’s an ascending figure I play at the end of ‘Pass the Buck’ [on the album LJ], which is the second piece I wrote in DADGAD. It will help strengthen your pull-offs and also give you a chance to practice alternate picking on the first string.”

Chimey Harmony
Another benefit to DADGAD, asserts Juber, is how it puts colorful harmony at your fingertips. “There’s an ambience that comes out of the tuning,” he explains, playing Ex. 8. “Because you’ve got adjacent scale tones, you can incorporate the 2, 4, or 6 into your chords without any finger gymnastics. In standard tuning, you can seek out these sounds, but in DADGAD, they come with the territory.”

To appreciate what Juber is saying, let’s don the theory goggles and take a closer look: In Gadd2, the open second string provides the 2. Notice how the root (G) and 2 (A) are located on adjacent strings, and form a major second interval. This major second appears again in Bbmaj13, but in this harmonic context, the open strings function as the 6 (G) and 7 (A). The final chord, Dadd4, offers a dissonant—yet very appealing—cluster: F#, G, and A. Composed of a minor second (F#-G) plus a major second (GA), the cluster accounts for three chord tones—the 3, 4, and 5—which are played on adjacent strings for maximum chime.

“So far, we’ve been exploring the keys of D and D minor,” says Juber, “but DADGAD shines in other keys too. For instance, in the key of A, you get a low, booming root on the IV chord, D. This is perfect for gospel-style, I-IV progressions. Of course in DADGAD, even standard I-IV changes offer extra harmonic color [Ex. 9].”

“This example also shows how DADGAD tends to emphasize the guitar’s baritone character,” Juber elaborates. “In standard tuning, the guitar is already on the borderline between a tenor and baritone instrument. In a lowered tuning like DADGAD, you really start to bring out its inherent throatiness—especially on an acoustic.” Though DADGAD is typically associated with folk music, it’s capable of jazz and pop sounds as well. “Playing clusters like these over a D drone,” says Juber, riffing on Ex. 10, “reminds me of McCoy Tyner’s piano voicings.” As you listen to these clusters, notice how they’re composed of a restless perfect fourth stacked upon a tart major second.

“But you shouldn’t conclude that all chords played in DADGAD contain dissonant, close intervals,” cautions Juber. “For example, I play a solo guitar version of ‘Strawberry Fields Forever’ [LJ Plays the Beatles!] in DADGAD, and in places, the song calls for traditional harmony. You remember that beautiful Mellotron section, the one with the breathy alto flutes? Here’s the chordal sketch for that passage, played in DADGAD [Ex. 11]. As you can see, regular major and minor voicings lie nicely on the fretboard.

Melodic Mojo
Legend has it Davey Graham developed DADGAD while traveling in Tangiers, as a way to make the guitar blend better with Moroccan oud players. “DADGAD is wonderful for modal sounds,” confirms Juber as he plucks Examples 12a and 12b. “You can sit for hours playing lines like these over a D drone. It’s easy to imagine Graham doing just that.”

Technically, Ex. 12a uses a blend of D Dorian (D, E, F, G, A, B, C) and D Mixolydian (D, E, F#, G, A, B, C). The important nugget is this: With both an Fn and F# in the same measure, the phrase moves from minor to major within two beats. But its ambiguous nature sounds right, doesn’t it? Ex. 12b is straight-up D Mixolydian, sans E. That’s a classic jazzbo trick: When improvising, drop one tone from a mode or scale, and then stick to that abbreviated note pool for your solo. By creating a melodic gap, you add an element of surprise to your lines. Finale
“Now that we’ve heard some of the sounds DADGAD offers,” says Juber, “let’s conclude on a conceptual note: The tuning becomes less alien when you realize the relationship between the top two strings [A, D] and the bottom string [D] is the same as in standard tuning [B, E, and low E]. You have a fourth on top and two octaves between the sixth and first strings. The only difference is that in DADGAD, these three strings are a whole-step lower than in standard tuning. The fifth, fourth, and third strings remain unchanged, so all your favorite moves are still there. It’s as if you’ve shifted strings six, two, and one down two frets relative to the others.That’s all it is. From this perspective, DADGAD seems like an old friend.”