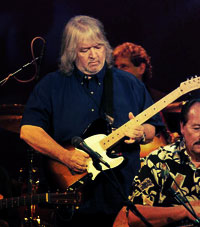 While the name Seymour Duncan might be synonymous with high quality pick ups and stompboxes, few know that before he was winding magnets and soldering wires, Seymour was a prodigious guitarist – packing clubs and rolling the rock back when the electric guitar was just coming of age. It was out of necessity that Seymour began tinkering with his tone; searching for new and better ways to make his guitar “sound good.” After all, that’s what we all want to do – sound good – and thanks to Seymour Duncan sounding good has never been easier. This month’s featured Fireside Chat is an attempt to separate the man from the legend…ladies and gentlemen, we give you Seymour Duncan.

1. First off, if you weren’t a musician, what would you be and why?
Well, I like to think of myself primarily as a musician. But to most of the folks who recognize my name, I’m a pickup builder. So maybe the answer is that I’d still be a pickup builder. However, I don’t think I’d be where I am today as a pickup builder if I wasn’t a musician. So it’s kind of hard to answer. What did Nigel Tufnel say? “I’d be a haberdasher or maybe work in a chapeau shop.” Truthfully though, I’d be a Cultural Anthropologist studying flint knapping techniques of ancient peoples. For real.

2. Honestly, how many hours a day do you practice?
When I was a kid, I spent all my time practicing. Nowadays, I’m so busy making pickups and touring that I don’t have nearly enough time to practice. Usually when I have a Seymour Duncan Band gig coming up I’ll rehearse with the band and practice my parts a bit. I do listen to a lot of guitar melodies and a lot of the practicing actually happens in my head. The truth is, sometimes I play more creatively when I haven’t picked up the guitar for a week, though I’m always complaining that I have no calluses. Once as a gag, Evan Skopp gave me a bag of broken glass that I was supposed to use to toughen up my fingertips!

3. What are you listening to lately?
I get lots of CDs across my desk and I do my best to listen to all of them. There are so many great players out there. And I love listening to the young guys and girls just coming up.

4. How would you describe the music business today?
Obviously, self-recording and self-distributing has changed everything. The record companies need to find a way to adapt or it’s all over for them. Sometimes I think of the record labels as dinosaurs munching on their grass and leaves and seeing a mushroom cloud in the distance after the meteor hit and the dust is just starting to obscure the sun. But they don’t know what that mushroom cloud is or what’s about to happen, so they just continue eating their grass and leaves not realizing they’re about to go extinct.

5. Stranded on a desert island, which guitar would you take?
It would have to be my Tele-Gib. It’s the twin of the guitar I made for Jeff that he used on Blow By Blow’s “Cause We’ve Ended as Lovers.” It has the second JB and Jazz Model pickups I ever made – Jeff’s guitar has the first. I’ve played that guitar more than any other over the last few years. It’s also been played by Ted Nugent, Peter Frampton, Nokie Edwards, Todd Money, and Jeff. Just this year I retired it from live gigs, but it’s definitely my desert island axe. Oh wait, I should’ve asked, does this desert island have 120 volts AC electricity?

6. Should world leaders learn how to play guitar? Why?
Sure. And not just guitar. Any musical instrument. Especially if you play in a band. Playing in a band teaches you how to work together, how to enhance others’ efforts, how not to hog the spotlight, how not to step on other people’s lines, and if you’re all grooving together, you can create wonderful magic that moves the people listening and puts a smile on your face. Imagine if geopolitics worked that way.

7. Let’s talk about what’s going on with you right now, your latest release, and what’s next?
I’ve been recording more this year than in the last five years combined. I have a Pro Tools rig and I’m working with a producer named Doug Scott. We’re doing mostly original tunes. Musician’s Friend is in post-production on a documentary about the Seymour Duncan company and I’m providing the score. Stay tuned for that. Vernon Neilly makes a guest appearance. Questions submitted to TrueFire via Facebook, Twitter, and our Forum.

8. What would you recommend to those interested in trying to build their own pickups? – Squall
Nowadays is the easiest time to get into pickup-making. With the Internet, there’s tons of information on how to get started and how to build a winding machine. And there are companies like Guitar Jones that sell everything you need. It’s very easy to buy the cheap Asian-made parts, wind up a few pickups in your garage, and lo and behold, you’re an instant boutique pickup winder. But it doesn’t mean the pickup is going to sound good. If you want to build your own pickups, you need to understand how the components and manufacturing techniques affect the sound. A lot of that comes with experience. And a lot of comes from actually manufacturing the parts and components rather than buying cheap versions off the shelf. Go ahead and read all the stuff you can on the Internet. Most of it is accurate. But there’s no substitute for experience. Learn from your mistakes. Document everything. Be open to honest criticism. And have fun!

9. What is the most important thing to get a pickup to sound its best? – jimiclaptoncarl
Getting the coil right. That involves using the right coil geometry, the right type and gauge of magnet wire, the right number of turns with the correct traverse, wax potting it properly, and hooking it up right. And, unfortunately, a lot of the off-the-shelf parts aren’t dimensionally correct. Sometimes you have to bite the bullet and pay for your own tooling.

10. Are there any plans to bring back the Convertible amps? – Hutch82
That was a great amplifier. Very much ahead of its time. It was kind of an analog pre-modeling amp. Unfortunately, there are no plans to reissue it at this time.

11. What do you see for the future of guitar pickups i.e. actives, materials, technologies? – rjbasque
We’ve done a lot lately with actives like my Blackouts. I have a new pickup called P-Rails which is pretty unique. Same with the Triple Shot mounting ring that allows stealth switching. We have some pretty well thought-out ideas about where pickup technology is going in the future and my engineers and designers are moving in that direction. I’m not going to say publically what that is. But I can say, stay tuned. There will be lots of exciting new and innovative products coming out of the Seymour Duncan company. And some products based on old technologies, like some new additions to my Antiquity line and replacements for odd size pickups.

12. And finally, any words of wisdom for your fans and fellow pickers?
First of all, listen to everything. If you’re a jazz player, listen to metal. If you’re a metal player, listen to the blues. If you’re a blues player, listen to jazz. Everything you listen to has a lesson in it if you’re open to it. Listen to other instruments besides guitar. If you want to know one of my favorite musicians, check out Davy Spillane. You’ll be surprised. Second, find your tone. Even if it means trying different pickups to get it. Third, even if you’re not already in a band, jam with your friends. Playing in an ensemble is a great way to get better. And most importantly, have fun. Remember, it’s called “playing” guitar, not “suffering” guitar.

To learn more about Seymour Duncan visit him online at www.seymourduncan.com and check out this exclusive video interview with long-time friend, and CEO of Boosweet Records, Vernon Neilly.