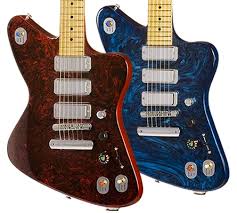 When Gibson announced a major press conference, our curiosity was piqued. The company’s invite to last week’s gathering read: This is more than a press conference. More than an event. THIS IS AN UPRISING!

So we headed to the Hard Rock Café in NYC with friends from National Guitar Museum to see what the fuss was all about. We were especially curious given what’s been whispered in the industry about Gibson’s financial troubles (as reported on the Punch-In back in January).

What did the revered maker of the Les Paul, the SG, and the 335 have in mind to save its famed name?

Henry Juszkiewicz, the controversial chairman and CEO of Gibson, took the stage and began by aligning himself with revolutionary inventors, from Thomas Edison to Guglielmo Marconi to Les Paul. After rattling off several major milestones in modern technology (the first transistor, the first guitar amp, the first wireless network) he took an SG by the neck — “I think this is the past!” — and smashed it over a cinderblock.

An audible gasp emerged from the crowd, but Henry J. was not finished shocking the room, where industry wonks and media members sat alongside a few pros including Ace Frehley, Kirk Douglas (the Roots), and Lou Pallo (longtime Les Paul sideman). Henry then unveiled the Firebird X guitar declaring, “This is revolution.”

Firebird X (that’s Firebird “ten”) is a 6-string with a digital brain. Theoretically, you can throw your stompboxes, rack gear, and modeling equipment overboard and manipulate your sound exclusively from the guitar’s onboard controls. The coils in its three humbuckers allow for 2048 coil combinations, and there are onboard sliders, toggles, pots, and “tog pots” for setting effects, distortion, EQ, pickup selection, and tuning controls. It’s also a Bluetooth device and connects wirelessly to the two included pedals (one for selecting presets, the other an expression pedal). Details were lacking at the press conference but apparently the Firebird X can provide a direct digital feed into a computer, presumably for recording, programming, or further signal routing. The onboard CPU is updateable and the onboard battery is good for 4 hours of playing time.

According to the public, Firebird X constitutes not so much an uprising as an upchucking. Several pages of scathing responses from the public are still live on their own site. But it’s hard to figure Gibson’s thinking on this one. The Firebird X will be produced in a limited run of 1800 guitars and sold in 400 retail shops. The list price is $5,570. Even if the technology housed in Firebird X were truly revolutionary, it’s difficult to understand how Gibson, who has priced its most widely desired models far beyond the reach of common players, would cause an uprising with another exorbitant collectible. You say you want a revolution? We’d all like to see the plan.

Perhaps, as Henry J. suggested, we’re just too dumb to understand it. When one member of the media asked nervously whether Gibson would carry on producing the instruments it’s famous for, Juszkiewicz allowed, “Yes, we will even continue building guitars for Luddites.”