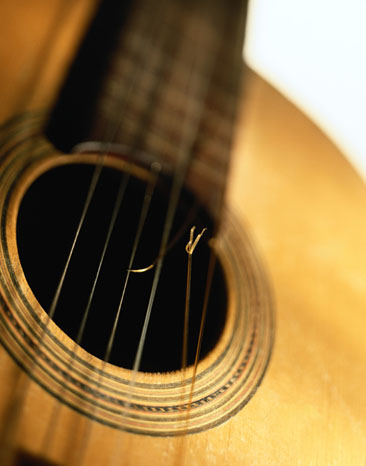 Spend thirty seconds playing a guitar strung with old, corroded strings and you’ll never want to strum on old strings again — unless you’re strange and lazy like me. I haven’t changed the strings on my acoustic guitar for over a year. Every song I’ve ever recorded was tracked with crusty strings. Every song I’ve ever recorded sounds like crap, too, but let’s not get judgy.

For those of you who don’t know or don’t want to admit you know, there is a sort of black soot that leaches onto your fingertips when you play really old, dirty strings. It smells like pennies with chicken grease. Strings have a good shelf life in the package but once you play them the metal reacts with your own sweat and filth and skin cells. I was working my way through 50 Acoustic Licks on my acoustic the other night (Pete’s Best) and in a freak accident I blinked one of my eyelids inside out and, as anyone would, I tried to pry it loose again, but with a sooty finger. It burned for a long time.

Beyond the health risks, crusty strings have a characteristic anti-tone. Part of the fun in playing the guitar is hearing the incredible timbres and upper harmonics, and those sounds aren’t so incredible when they’re bubbling through year-old finger muck. A lot of guitarists find new strings too bright and brash, and I know Eddie Van Halen has said that worn-in strings were crucial to his “brown sound” tone. But there’s a difference between worn-in and dead. And after the strings go dead, they start to decay.

At any rate, I think I’ve made my point. Playing old strings is terrible and potentially dangerous and I don’t know why I do it. I chalk it up as one of the many terrible cross-over habits from my youth; guitar strings were expensive when I had to buy them with leftover milk money. So I only changed them when they broke. Simply put, my acoustic strings aren’t broken yet.

I’m working hard to change those habits. In fact, I have several packs of fresh strings in my drawer right now. But mostly I’m more careful about touching my eyes.

A few words from the wise: