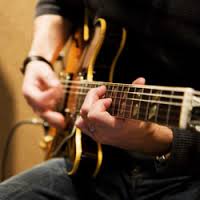 Labor Day weekend is upon us, and it is time that we honor all the hard work put in by the entire TrueFire faculty. They all have spent countless hours in and out of the studio trying to find the best and most innovative ways to teach and inspire. Their extraordinary efforts show through in the quality of their guitar lessons and for that we are all endlessly appreciative. To express our gratitude, we will be featuring each of them in this 5-part series on The Punch-In so you can get to know them all a little bit better.

So, without further adieu, here are the first 10 artists whom we consider to be part of the Top 50 Hardest Working Guitarists in the World (in alphabetical order):

Andy Aledort has been a significant figure in the international music scene over the last 20 years. As a senior editor for the top guitar-oriented music magazines GUITAR WORLD, GUITAR FOR THE PRACTICING MUSICIAN, GUITAR EXTRA, GUITAR LEGENDS, and GUITAR WORLD ACOUSTIC, among others, his work is unsurpassed as a music transcriber, instructional columnist and journalist. He has authored over 200 books of guitar transcriptions as well as a series of guitar-related instructional books and videos/DVDs, all of which are distributed worldwide, for the leading music publishers Hal Leonard Corp., Warner Brothers Publishing and Cherry Lane Music. Aledort is a performing musician as well: along with leading his own ensembles in the New York/tri-state area, he is often tapped for high-profile appearances with artists such as Buddy Guy, Dickey Betts, and the Allman Brothers band.

Trey Alexander picked up his first guitar at age 15. It was an antique acoustic model that his parents used as a decorative piece in their home. Although he had always loved music, this was Alexander’s first instrument and he began practicing so much that he wore the winding off of the strings. This is when Alexander’s dad, his biggest fan and inspiration, realized that his son was more than a curious teenager with an old guitar. Within a few weeks of discovering this instrument, Alexander began playing regularly at open mics and jam sessions and won his first guitar competition. When Alexander was 18, he saw Steve Vai perform live in concert, an experience he describes as “awe-inspiring.” He stayed up all night describing the experience to his father, who listened to him play for hours. His father told him, “You will be one of the best guitar players who has ever lived.” Those words were his father’s last as he died of a brain hemorrhage that night. Alexander realized that he needed to live his dream, to be a musician, and carry on his father’s legacy. As it turns out, his father was right.

Widely respected as one of the country’s foremost guitarists, Muriel Anderson is the first woman to have won the National Finger picking Guitar Championship. Her recordings have traveled as far as outer space, accompanying the astronauts on a space shuttle mission. Muriel Anderson’s audiences experience a world of music in each concert – international, folk, classical, jazz, Beatles, bluegrass, and perhaps a Sousa march, played nylon string, steel string and harp guitar. Muriel was the first woman to win the National Fingerpicking Guitar Championship and was also awarded a bronze level for classical in the 2009 Acoustic Guitar Magazine’s Players Choice poll. She has been composing since the age of six and has published works for guitar and orchestra, voice, and solo guitar. Muriel has published several instructional books and videos and tours extensively. She is also the founder and director of Music for Life Alliance charity, and is the host of Muriel Anderson’s All STAR GUITAR NIGHT. For the past 14 years, Muriel Anderson’s All Star Guitar Night concert series has brought together the world’s best guitar players and the music community in support of a great cause.

Bruce Arnold has developed an extensive reputation as a composer and guitar virtuoso. His works are an original juxtaposition of 20th Century twelve-tone compositional methods and jazz improvisation techniques. Interviewing Mr. Arnold in The Los Angeles Times, Jazz critic Don Heckman wrote “Arnold’s music never loses its contact with jazz and he deserves credit for his effort to expand the potential of the jazz palette.” —and The New York Times has written that “Bruce Arnold could be the ultimate crossover musician.” As an educator, Mr. Arnold has taught at some of the most prestigious music schools in America, including the New England Conservatory of Music, Dartmouth College, Berklee College of Music, Princeton University, New York University, New School University, City College of New York. American guitarist Stephen Bennett has become known over the last two decades as a versatile and original musician consistently garnering critical praise and audience enthusiasm for his recordings and live performances. With his musicality, relaxed stage presence and quick wit, Stephen has performed throughout the United States, as well as in Canada, Australia, Japan, and around Europe. With nearly 20 CD recordings to his credit at this writing, a new Stephen Bennett recording is always in the works. Aside from his work on the six-string guitar, Stephen is also one of the world’s premiere performers on the Harp Guitar, an instrument he inherited from his great-grandfather. As a composer and arranger, he has created an enduring repertoire and a significant body of recorded work for this instrument. Matthieu Brandt from Amsterdam, Netherlands (b. 1961) has been strummin’ a guitar since 1983 when he traded his first P.C. for his first Alfa Guitar. Starting out as an acoustic fingerstyle blues player and studying with Irish Blues Virtuoso Martin Hutchinson, he quickly got an appetite for electric blues. He started out in his first blues band “Bealestreet” in 1985 – a band that was to exist for five looooong years. In 2000 he started giging with “Too True To Be Blue” and recorded his first Solo CD in 2002: ‘Back Log’. In that year he also started the band Mindway, together with Edo Donkers, Gerrit Berkouwer, Rodin van der Hart and Joren Nooij. In May 2006 Matt released his second album ‘Man in Shades’, featuring 12 all original songs. Performed by him and 16 guest musicians in different arrangements. Guest musicians include Larry John McNally (songwriter for Bonnie Raitt, Don Henley, Chaka Kahn, Ed Boekee and many others.)

Brad is living proof that monster players don’t all live in the big music meccas. Based in St. Petersburg, Florida, our home city, he’s our hired gun – the guy we call in to perform the tough lessons when the author is not available. Brad, who has been teaching and leading his own bands for more than 20 years, prides himself on his versatility. His rep in the region is that he can play anything. Brad brilliantly performs an extensive lesson on Eddie Van Halen licks an exploration of London blues along with interpretations of Vernon Reid, Jeff Beck, Eric Clapton, Mike Stern and even some 18th Century parlor guitar.

Eighteen‐time Grammy nominee, three‐time Grammy winner and all time guitar great, Larry Carlton established himself from his first recording, A Little Help From My Friends. His studio credits include musicians and groups like Steely Dan, Joni Mitchell, Michael Jackson, Sammy Davis Jr., Herb Alpert, Quincy Jones, Bobby Bland, Dolly Parton, Linda Ronstadt and literally dozens of others. He went on to perform with the Crusaders and then with the multi platinum jazz super group Fourplay. With 30 albums to his credit and having performed on over 100 albums that have gone Gold or Platinum, Larry Carlton has set a standard for artistry that spans three decades. In 2008 Larry Carlton received a Lifetime Achievement Award from Guitar Player magazine at the historical Ryman Auditorium and was presented the “Titan of Tone” award from Premier Guitar Magazine at the Rock and Roll Hall of Fame. Larry also picked up 2 more Grammy nominations in 2009 bringing his career total to 18 nominations with 3 Grammy wins! Larry’s “Greatest Hits Rerecorded ‐ Volume One” released by 335 Records was nominated for Best Pop Instrumental Album and “Fortune Teller” from Fourplay’s Energy was nominated for Best Pop Instrumental Performance.