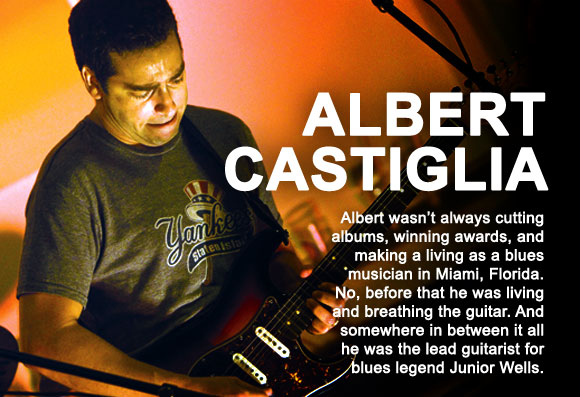 From humble beginnings you went on to play with some world class cats. What does it take to get yourself there?
It takes a lot of work, perserverence, thick skin and luck. But the most important thing is love. If you don’t love what you do, you’ll never have a chance. The music business can be a tough thing to handle. There are lots of pitfalls, obstacles and negativity thrown at you and it’s the love of the music that’s going to get you through it. If you don’t have the love, find something else to do.

You’ve got a powerful set of vocals–some people say playing and singing are two different instruments, while others say they are simply different parts of the same instrument [the human body]. What’s your opinion and how do you make music with your voice and guitar?
I think they are two different instruments, but that’s just my opinion. Personally, I feel that with the guitar there is always potential for me to be better at it and to whip out new things. With my voice, I don’t feel that way. I think my vocal range is limited. Because of this, the vocals dictate how I write songs. It’s safe to say that I have less confidence in my voice than I do in my guitar playing.

Do you ever write something and think to yourself, “that was cheesy, let me try something else…”?
Usually if I write some stinky cheese, it doesnt’t make it past the first verse. I scrap it and move on to something else. If I write a riff or lick and it stays in my mind, haunts me in my sleep and I’m able to play it on my guitar the next day without having to refer to my notes or recording machine, then it’s usually a keeper.

The internet has made music more accessible than ever which has also crowded the stage for musicians, so to speak. How do you stick out from the crowd and get people to notice you?
I don’t know if there is a set formula for sticking out amongst the masses. My approach has always been to constantly gig and never let up. The more you put yourself out there and expose yourself to people, the better the odds for success.

The blues was like the big bang for music; giving birth to an ever evolving universe of musical styles. Why is the blues so popular, and why do you play it?
Honesty & Balls, that simpIe.The mesages are honest and real and the sound is raw, primitive and gutsy. If you don’t believe me, listen to the Muddy Waters’ “Hard Again” album or Hound Dog Taylor’s Alligator  recordings.

Related to the first question: what’s the most important lesson you’ve learned in creating a career as a musician?
Never give up and you’ll at least be able to make a decent living at it and that’s not a bad thing.

Three ingredients for the perfect blues solo?
1) The Band
2) The Song
3) The Soloist

Four bands or artists every guitarist should know and why.
1) Eric Clapton, because he was the one that first showed me the blues
2) Muddy Waters, because he made me want to play the blues
3) Buddy Guy & Junior Wells, because they were inspiring when they worked together
4) Jimi Hendrix, because he was a freak of nature

What’s on the horizon for you?
April will mark the beginning of a very extensive tour schedule. I’ll be writing songs on the road and hopefully have some material for a new cd at the end of the year or early next year.

Best advice you’ve ever gotten or would give?
Junior Wells & Luther Allison both gave me advice that I continue to live by. Junior told me to never stop learning and Luther told me to keep on picking.

Listen online to cuts from Albert’s album, “Keepin’ On” and be sure to check out Albert Castiglia’s official website: www.AlbertCastiglia.com