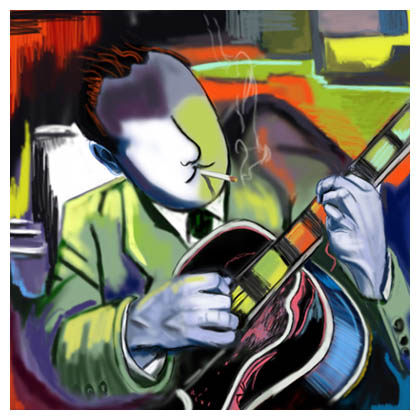 Everywhere you look there are lists of “essential” albums that no self-respecting musician should be without. These contain different combinations of the largely the same material and although they are essential, I wanted to present some overlooked jazz guitar albums that are equally important. These seven albums by no means represent overlooked or under-appreciated players, but they are overshadowed by some of the artists’ other work. 1. Jim Hall – “It’s Nice To Be With You: Live in Berlin”
When most people talk about their favorite live Jim Hall album, the common answer is the 1975 session entitled “Jim Hall Live!”. “Live in Berlin” takes place several years earlier mixes some of Hall’s originals with standards such as “My Funny Valentine” and “Body and Soul.” Joining Hall on this session is bassist Jimmy Woode and Drummer Daniel Humair.

Recommended Track: “Young One, For Debra”, on this track Hall plays an overdubbed duet with himself that was written for his daughter, Debra. 2. Gary Burton Quintet – “Dreams So Real”
Gary Burton has a thing for discovering great young guitar players. On this 1975 session consisting entirely of Carla Bley’s music, Burton’s quintet includes Pat Metheny and Mick Goodrick. Once teacher (Goodrick) and student (Metheny), this recording is a great early example of the ECM sound. Bassist Steve Swallow and drummer Bob Moses fill out the group nicely. On this record you really can hear Metheny develop his own sound. 3. Jimmy Raney – “Live in Tokyo”
As one of the most underrated guitar players of the modern era, Jimmy Raney is an well of great melodic bop playing. This trio album from 1976 includes bassist Sam Jones and drummer Leroy Williams. Raney brings new life to standards such as “Cherokee” (which is totally burning), “Anthropology” and “Darn That Dream.”

Recommended Track: “Stella by Starlight”, here Raney proves that he is an accomplished solo guitarist worthy of being included with Joe Pass, Lenny Breau and George Benson. 4. John Abercrombie – “Timeless”
Few artists have been so closely identified with a label than John Abercrombie and ECM. Recorded in 1975, this was Abercrombie’s debut as a leader for the label. The material includes four originals and two tunes by keyboardist Jan Hammer, who along with drummer Jack DeJohnette form the trio. Considering there isn’t a bass player, Hammer fills out the space nicely with an organ, synthesizer, and piano. 5. Tuck Andress – “Reckless Precision”
This album is when musicians first took notice of Tuck Andress. You can usually find him playing duo with wife Patty Cathcart, but this album of instrumentals is for guitar nerds only. Opening with the Michael Jackson tune “Man in the Mirror”, he instantly cemented his reputation as one of the foremost jazz guitarists around.

Recommended Track: “Somewhere Over the Rainbow/If I Only Had A Brain”, here Andress gives a lesson on how to make sure the melody stands out in an arrangement. 6. Danny Gatton – “Redneck Jazz”
Guitar Player called Danny Gatton “The World’s Greatest Unknown Guitar Player” and this album was recorded in 1978 and re-released in the 1990s. Gatton is featured on both guitar and banjo and his band includes the legendary pedal steel player Buddy Emmons. This is a great example of how jazz can evolve. Combining his many influences, Gatton creates a unique style (and genre) that combines his love for rock, country and jazz.

7. Allan Holdsworth – “None Toon Soon”
Know as one of the finest fusion guitarists ever, Allan Holdsworth recorded this collection of standards in 1996. With his endless technique, Holldsworth delivers amazing interpretations of two Joe Henderson tunes (“Isotope” and “Inner Urge”) in addition to Django Reinhardt’s “Nuages.” The frenetic style of Holdsworth is accompanied by bassist Gary Willis and drummer Kirk Covington.

– Jason Shadrick is the Director of Marketing and Artist Relations for The National Guitar Workshop and has a Master’s Degree in Jazz Pedagogy from the University of Northern Iowa. He also has a great guitar blog, music.guitars.life, and will be a occasional contributor to The Punch-In.