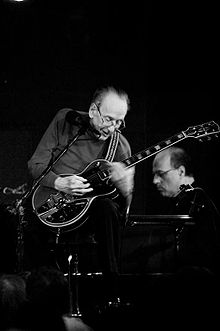 Les Paul was jazz and country guitarist, songwriter and inventor. He was a pioneer in the development of the solid-body electric guitar which made the sound of rock and roll possible. He is credited with many recording innovations. Although he was not the first to use the technique, his early experiments with overdubbing (also known as sound on sound), delay effects such as tape delay, phasing effects and multitrack recording were among the first to attract widespread attention.

His innovative talents extended into his playing style, including licks, trills, chording sequences, fretting techniques and timing, which set him apart from his contemporaries and inspired many guitarists of the present day. He recorded with his wife Mary Ford in the 1950s, and they sold millions of records. Among his many honors, Paul is one of a handful of artists with a permanent, stand-alone exhibit in the Rock and Roll Hall of Fame. Jimi Hendrix was an incredible guitarist and singer-songwriter. In fact, he is widely considered to be the greatest electric guitarist in musical history, and one of the most influential musicians of his era across a range of genres. Hendrix often favored raw overdriven amplifiers with high gain and treble and helped develop the previously undesirable technique of guitar amplifier feedback.

Hendrix, as well as his friend Eric Clapton, popularized use of the wah-wah pedal in mainstream rock which he often used to deliver an exaggerated pitch in his solos, particularly with high bends, complex guitar playing, and use of legato. As a record producer, Hendrix also broke new ground in using the recording studio as an extension of his musical ideas. He was one of the first to experiment with stereophonic phasing effects for rock recording. Hendrix won many of the most prestigious rock music awards in his lifetime, and has been posthumously awarded many more, including being inducted into the Rock and Roll Hall of Fame in 1992. Chet Atkins was a guitarist and record producer who created the smoother country music style known as the Nashville sound, which expanded country’s appeal to adult pop music fans as well. Atkins’s picking style, inspired by Merle Travis, Django Reinhardt, George Barnes and Les Paul, brought him admirers within and outside the country scene, both in the United States and internationally.

Atkins produced records for Perry Como, Elvis Presley, the Everly Brothers, Eddy Arnold, Don Gibson, Jim Reeves, Jerry Reed, Skeeter Davis, Connie Smith, Waylon Jennings and others. Atkins is notable for his broad influence. His love for numerous styles of music can be traced from his early recordings all the way to modern rock stylings of many notable guitar players. Among many honors, Atkins received 14 Grammy Awards as well as the Grammy Lifetime Achievement Award, nine Country Music Association Instrumentalist of the Year awards, and was inducted into the Country Music Hall of Fame. Tedesco was described by Guitar Player magazine as the most recorded guitarist in history, having played on thousands of recordings, many of which were top-20 hits. He recorded with most of the top musicians working in the Los Angeles area. His guitar lines helped create the California sound, he played on albums from Jan and Dean and The Beach Boys. He also recorded with Frank Zappa in the 60s and 70s.

Tommy can be heard on almost any TV show recorded between 1960-1980 including Twilight Zone, Mickey Mouse Club, Bonanza, Green Acres, Mash, as well as movies like The Deer Hunter, Field Of Dreams, Jaws, and The Godfather. He also was a music educator, wrote books and a long running colum in Guitar Player Magazine. Although Tedesco was primarily a guitar player, he also played the mandolin, ukulele, and the sitar as well as 28 other stringed instruments (though he played all of them in guitar tuning). Christian was an important early performer on the electric guitar, and is cited as a key figure in the development of bebop and cool jazz. He gained national exposure as a member of the Benny Goodman Sextet and Orchestra from August 1939 to June 1941. His single-string technique combined with amplification helped bring the guitar out of the rhythm section and into the forefront as a solo instrument.

John Hammond and George T. Simon called Christian the best improvisational talent of the swing era. In the liner notes to the 1972 Columbia album Solo Flight: The Genius of Charlie Christian, Gene Lees writes that “many critics and musicians consider that Christian was one of the founding fathers of bebop, or if not that, at least a precursor to it”. Christian’s influence reached beyond jazz and swing — in 1990 he was inducted into the Rock and Roll Hall of Fame. Tampa Red is best known as an accomplished and influential blues guitarist who had a unique single-string slide style. His songwriting and his silky, polished “bottleneck” technique influenced other leading Chicago blues guitarists, such as Big Bill Broonzy and Robert Nighthawk, as well as Muddy Waters, Elmore James, Mose Allison and many others. Chuck Berry is a guitarist, singer, and songwriter, and one of the pioneers of rock and roll music. With songs such as “Maybellene” (1955), “Roll Over Beethoven” (1956), “Rock and Roll Music” (1957) and “Johnny B. Goode” (1958), Chuck Berry refined and developed rhythm and blues into the major elements that made rock and roll distinctive, with lyrics focusing on teen life and consumerism and utilizing guitar solos and showmanship that would be a major influence on subsequent rock music.

Berry was among the first musicians to be inducted into the Rock and Roll Hall of Fame on its opening in 1986, with the comment that he “laid the groundwork for not only a rock and roll sound but a rock and roll stance.” Berry is included in several Rolling Stone “Greatest of All Time” lists, including being ranked fifth on their 2004 list of the 100 Greatest Artists of All Time.