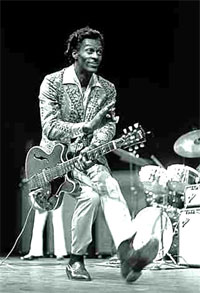 TrueFire Course Blogs are created by students who post summaries of their learning experience as they work through a particular TrueFire course. While an individual student starts and then leads a Course Blog, many other students join in the process. Participating students post additional information related to the course, which extends the overall educational quality of the learning experience. The following is an excerpt from the course blog by Wolfboy1 from the TrueFire Forum on Joe Deloro’s Blues Rock Road Trip:

Well, we’re off on a road trip!

When I got this course I was really interested to take a look at some “roots” rock and roll — the bedrock players, so to speak (and no, I don’t mean the Flintstones), from early icons like Bo Diddley and Chuck Berry  to later blues-fused heros like Hendrix, Clapton, Page, Richards, and Beck. Plus, I figured this course would have a strong rhythm component. I was influenced by the old Sarge Chris Buono back in SWAT Camp, and I added Road Trip and Road Trip 2 around the same time.

I love Chuck Berry, and that’s right where we start off in this one: a standard 4-part lesson on Chuck’s style, with two rhythm and two lead lessons that are very Berry. Joe starts off referring to Chuck’s Chess Records days and how the Chicago record label had backing blues musicians playing a shuffle behind Chuck’s rhythm guitar, which he played more or less straight. Listed to the difference when Joe plays them. You gotta to know the blues shuffle…it’s fundamental.

As the Rock and Roll Hall of Fame puts it, “While no individual can be said to have invented rock and roll, Chuck Berry comes the closest of any single figure to being the one who put all the essential pieces together.” Chuck Berry was born in Missouri in 1926. By age 22 he’d spent several years in jail, gotten married, and worked as a factory worker, janitor and beautician. In early 1953 he started playing with Johnnie Johnson’s Trio, covering Nat “King” Cole and Muddy Waters and mixing it up with some country or hillbilly songs.

“Listening to Nat Cole prompted me to sing sentimental songs with distinct diction,” Berry once said. “The songs of Muddy Waters impelled me to deliver the down-home blues in the language they came from. When I played hillbilly songs, I stressed my diction so that it was harder and whiter. All in all, it was my intention to hold both the black and the white clientele by voicing the different kinds of songs in their customary tongues.”

In 1955 the band traveled to Chicago and Berry began stealing the limelight with his outlandish showmanship. Around this time he came to the attention of Muddy Waters, who suggested Chuck contact Leonard Chess of Chess Records, the label that Waters had recorded with throughout his career. Leonard was concerned about the decline in the popularity of Chicago blues and was beginning to look elsewhere for the next big thing.

Berry’s first track with Chess was “Maybellene,” a reworking of a classic country & western hit, released in August 1955. The song went to #5 and in doing so changed the course of music history. The song was significant not just because its musical style hinted at the rock and roll that was to follow, but also because it signaled the start of “black” music gaining widespread popularity with mainstream, young, white America.

In the Road Trip course introduction, Joe refers to the rhythms from “Johnny B. Goode” and “Roll Over Beethoven.” Here they are:

Johnny B. Goode
With Commentary:

Roll Over Beethoven
Early On: