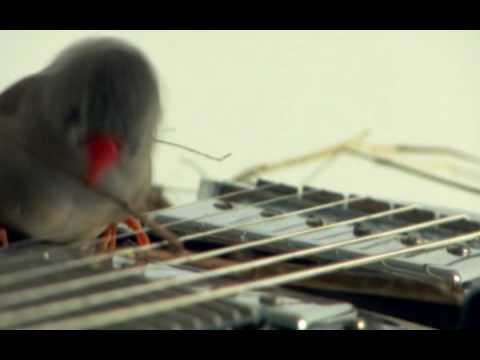 Fuel for the Fire:
“The function of music is to release us from the tyranny of conscious thought.”
– Sir Thomas Beecham

>> Art Lovers Flock to See “Jimi Henchicks” An obscure art exhibition featuring live birds “playing” electric guitars has become a runaway hit and internet sensation. Last week people going to the exhibition at the Barbican centre in London were waiting up to 90 minutes to see the birds perform — with queues far longer than for the blockbuster Van Gogh exhibition at the Royal Academy. Read the full article and check out the video of the birds below:

>> Entertaining rock and roll expression or blasphemy? Gibson examines the art of guitar smashing with “5 Ways to Destroy a Guitar” featuring Jimi Hendrix, Pete Townshend, Kurt Cobain, Ritchie Blackmore & Stevie Ray Vaughn. Read the full article or check our favorites from the list with videos below:

Play The Hell Out of It Like Stevie Ray Vaughan

Hot Topic of the Week:

>> Are guitar video games good for teaching kids guitar or should they just try the real thing?

– A video game with a stringed guitar!? A new twist to the popular music game genre will bring players one step closer to the rock icons they seek to emulate — Power Gig: Rise of the Sixstring features a guitar controller with real strings (instead of buttons). Power Gig is similar to other music games such as Guitar Hero and Rock Band, and features “beat-match” style play in which players must match the onscreen beats with their instruments. Read the full article from PCWorld.

– “I’m the voice of Guitar Hero 6,” says KISS front man Gene Simmons during a video clip produced by Game On, a division of UK media site ITN. And that’s all he says. The clip has been removed from the context of what’s assumed to be a full interview and essentially turns Simmons’ statement into a gag line. Still, Simmons does appear to be the first “official” spokesperson to outright name the next iteration of Guitar Hero, albeit unofficially. Read the full article from Joystiq.

– “Real” guitar teaches you to play as easy as Guitar Hero? This concept is a guitar where you learn a real, actual, applicable beyond the game skill. The designer of this project had the idea come while he was watching friends jam upon Guitar Hero and Rock Band all day long. He was so good at that, but couldn’t play a real guitar at all! Read the full article from Yanko Design.

Let us know your thoughts on this topic in the comments!

This example illustrates the creation of the arrangement. The first chorus features mainly the bass and the melody. Later, harmonies and chords are introduced. Then, chord substitutions are made and some filler notes are added.