One of my favorite things is adding color to my solos by going outside the key and then resolving back to the key. You can almost do just about anything while you’re outside as long as you do it tastefully and always resolve back to the prevailing key. This is an advanced concept and I always stress that you should have a good bebop background in order to really do this with ease. Once you know the “Language of Improvisation” you can say anything while your improvising… LIKE going outside the key and bringing it back in. Enjoy! 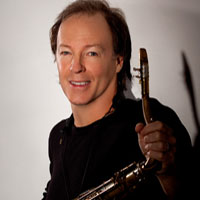 Throughout his more than 20-year career as a solo artist, saxophonist Bill Evans has explored a variety of musical settings that go well beyond the confines of traditional jazz, including rock, hip-hop, jam, fusion, reggae, Brazilian and slamming funk. Evans stepped into more adventurous territory with his 2006 Grammy nominated release Soulgrass, blending jazz, funk and bluegrass into a seamless and wholly unique hybrid of quintessentially American styles. He collaborated on the project with an exciting and eclectic group of all-stars, including Vinnie Colaiuta, Stuart Duncan, Jerry Douglas, Bela Fleck, Bruce Hornsby, John Scofield, Victor Wooten and Mark Egan.

Bill first joined Miles Davis group in 1980 at the age of 22, and went on to record six records and tour the world with Davis numerous times over a four-year period. He then toured and recorded three CDs with John McLaughlin and the Mahavishnu Orchestra, and later played with Herbie Hancock, Lee Ritenour, Dave Grusin, Steps Ahead and Mick Jagger, among others, garnering a few Grammy Awards along the way. The sax man has been touring almost exclusively with his own band since 1990, playing well over 100 concerts worldwide per year. He has recorded 19 solo CDs, including his latest, Dragonfly, and received two Grammy nominations for his solo releases, one for Soul Insider (2002) and the other for Soulgrass (2006).