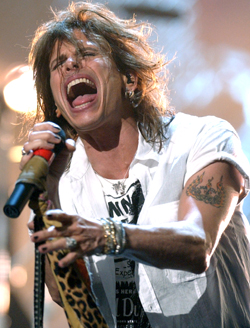 As I’m sure many of you were already aware, there was a rumor floating around this week that Steven Tyler was leaving Aerosmith. The rumor spread quickly after Joe Perry tweeted (that’s right, Joe Perry is on Twitter and you should be too) that Aerosmith was “looking for a new singer to work with” and told several news outlets that Tyler had quit, at as far as he could tell. Many brought up the fact that Tyler did not have the physical ability at the age of 61 that he once had, citing the fact that the band canceled the remainder of its summer tour this year when Tyler fell off a stage and was injured during a performance in South Dakota.

All those rumors were quashed, however, when Steven Tyler and Joe Perry made a surprise appearance at a New York City venue and Tyler told the crowd: “I am not leaving Aerosmith,” according to Rolling Stone and Billboard magazines. That seems to have put an end to speculation about the Tyler’s future with Aerosmith, but it also got me thinking about band breakups that didn’t turn out so well. Check a few of them out below and see the full list over at Spinner.

Feel free to share your own bad band breakup story in the comments!

“Original bandleader Syd Barrett was an early casualty in 1968, addled by drug-fueled mental illness. Roger Waters (left) departs in 1985, just after releasing ‘The Final Cut’ — practically a Waters solo album with the other Floyd members as sidemen. Waters declared the band “a spent force” and then sued David Gilmour and Nick Mason for carrying on with the Pink Floyd name.” – Spinner

“In 1969, the Beatles’ final year together, John Lennon got sick of Paul McCartney, George Harrison felt snubbed, and everyone but John resented Yoko Ono’s omnipresence. The ‘Let It Be’ sessions the Fab Four were recording early that year as a documentary and an album were an infamous disaster; the results were released posthumously in both formats in 1970.” – Spinner

“Sid Vicious’ debilitating addiction to drugs spawned increasingly violent and unpredictable behavior. Johnny Rotten couldn’t stand to be around the heroin-addled Vicious, calling him a “waste of space,” and Rotten constantly feuded with the group’s manager, Malcolm McLaren. When Rotten declared he was leaving the band while on tour in California in 1978, they abandoned him in Los Angeles with no money and no plane ticket home to England.” – Spinner

The Mamas and the Papas

“The marriage of members John and Michelle Phillips was rocked by her affair with bandmate Denny Doherty; Jill Gibson, a “secret” replacement for Michelle Phillips, was briefly employed before Michelle was welcomed back. In 1968, “Mama” Cass Elliot quit when Phillips insulted her in front of Mick Jagger.” – Spinner

“Original members Randy Meisner and Bernie Leadon departed in the mid-’70s. In 1980, Glenn Frey and Don Felder came to blows backstage during a concert; Frey and Don Henley mixed the swan-song LP ‘Eagles Live’ from opposite coasts; by the end of the year they were no more. Henley declared the group will reunite “when hell freezes over.” (The band’s live album of its 1994 reunion tour is titled ‘Hell Freezes Over.’)” – Spinner

“In 2002, years after the 1971 death of Jim Morrison and the initial dissolution of the Doors a year later, keyboard player Ray Manzarek and guitarist Robby Krieger formed a group they called the Doors of the 21st Century, with the Cult’s Ian Astbury as frontman. A year later, Doors drummer John Densmore (left), who did not participate in the reunion, successfully sued the reconstituted band from using the Doors name.” – Spinner

“By 1979, Boston mastermind Tom Scholz’s perfectionism led impatient mates to record under the name of guitarist Barry Goudreau. CBS marketed the project under the name Almost Boston; the inevitable lawsuits followed. The recent suicide of Boston singer Brad Delp (left) is attributed in part to his disappointment over the band’s problems.” – Spinner

Check out Spinner to see their full list of 20 bitter band breakups.