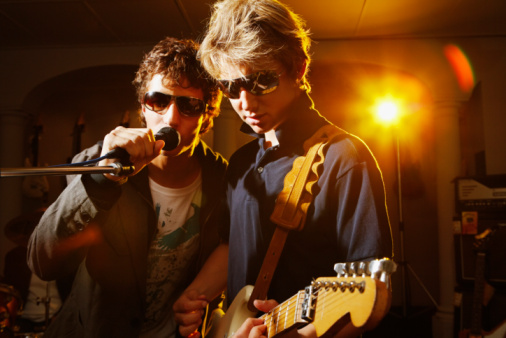 Playing live can be addictive. But a lot of players never get to experience the feeling of satisfying a crowd — and satisfying themselves — because they’re waiting to form that perfect band before taking their songs public.

Though a classic band setup like guitar + bass + drums + vocals (maybe with a second guitarist or keyboardist, too) can be great, there’s a lot to be said for finding an alternative approach. Opening up your mind and your music to unconventional live situations can be hugely rewarding. Why wait around for a dream band when you can be playing out right now?

A recent gig: Guitar + Drums + Vocals
For starters, you could just find a drummer and a singer, and skip the bass player. No offense meant to bass players, but in a trio format such as that, you (the guitarist) are in total control of all the music. There’s a lot of responsibility, but it’s also very liberating.

I began playing out recently with a similar lineup. The singer laid down some keyboard pads on just a few songs, and the drummer played a small kit. He also streamed loops out of a laptop. At first, it took a little getting used to, from a guitarist’s point of view. I quickly came to realize that playing root-based chords low on the neck (generally not above III or V position) were essential to a full sound. For example, it worked best to play a Gmin7 chord in III position with the root on the 6th string, whereas with a bass player I might have played the chord up in X position with the root on the 5th.  Just as important, I literally tailored my guitar and amp configuration to provide me the most bass response. The lineup was definitely a “learn as you go” situation.  [Stay tuned for the upcoming article Right Rig for the Gig, which explores gear options for live situations — Ed.]

A few things became quite clear after the first few shows:

•  This is a great way to play out. If the drummer and I felt like taking it somewhere during a song, there was no bass player to worry about following us.

•   Not one person in any crowd complained there was no bass.

•   Rehearsals, costs and band politics were kept to a bare minimum.

•  I became a better player, because I couldn’t solo in the traditional sense. I would step out for just a measure at a time, and also found that it helped to draw more doublestops into my soloing for a fuller sound.

•  I used a ridiculously simple setup: 1×12″ amp, an octave pedal for extra bass, and a Malekko Chicklet for some extra wet reverb on slow songs.   http://www.malekkoheavyindustry.com/index.php/chicklet

•   It truly was liberating.

That type of band lineup won’t suit everyone, but it does serve the idea of breaking out of tradition.  Here are some other very workable live stage scenarios. Guitar + Laptop
Run pre-produced tracks behind yourself, or trigger loops on the fly with a pedalboard and a suitable program such as like Ableton LIVE. You then control the tempo and feel of every song. Take the time at home to make interesting rhythm tracks and then stretch out live on top of them. Guitar + Drums
Why not just gig out with you and a drummer? Worked for the White Stripes. If the drummer is good and can follow you, you’ll be leading the way the whole night. This will leave a lot of room for both of you to improvise. It also works wonders for your sense of time and syncopation. How about the classic guitar + vocals? It could be electric, by the way — you don’t have to take the classic troubador-with-acoustic route. You could also get something very interesting going with two electrics; either with complementary rhythm parts, or with one playing rhythm and the other laying down ambient pads and fills.

It can be exciting for both the crowd and the player to hear loops created live, and then to have those loops become backing tracks. If you’re good at multiple instruments, you could even make like RicoLOOP, the one-man looping band. Audio software is so advanced now that well-programmed parts and loops can make for excellent accompaniment on the live stage. You could easily gig with just bass, guitar and a laptop streaming some cool parts. This way, you can have the bass player lock in with the grooves, and you can take care of the melodies, rhythms and leads. Every arrangement will have its fair share challenges, but at the very least you’ll be out there playing and not sitting at home waiting for the perfect lineup. We saw Kanye West on Letterman with one keyboard and a five-man drum corps (and Autotune on his vox), and he killed. Or look at the late, great Morphine: drummer, bari sax, and a vocalist playing slide on a two-string bass. There’s no shortage of inspiring examples.

Unconventional band make-ups can be creatively inspiring, too. Guaranteed, if you start writing and arranging with an unusual setup in mind, your music will take many unforeseen twists and turns. So step out of convention and hit the stage with something different. You may even break ground on a whole new style.

Rich Tozzoli is a Grammy-nominated engineer, mixer, producer and composer. He has worked with artists such as Ace Frehley, Al Di Meola and David Bowie, among many more, and is the author of Pro Tools Surround Sound Mixing. Rich is also a lifelong guitarist and composer. His work can be heard regularly on FoxNFL, HBO, and Discovery Channel, and he’s recently released the full-length CD, Rhythm Up.