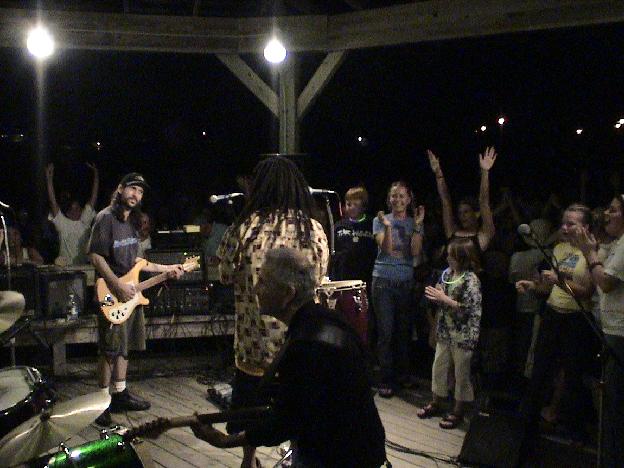 Lay It Down Live … and Leave

Even in the age of the $0.99 song, a full-length release is still a must. Whether you’re selling your downloads online or using a good ol’ fashioned CD to promote yourself locally and sell at shows, you need 8 or 10 songs in the can to be taken seriously.

But recording and releasing an album’s worth of material trips up a lot of talented people. One reason is that we artistic types care — we’re not going to put anything out into the world that doesn’t represent what we hear in our head. Then you’ve got the difficulty of coordinating schedules, plus the inevitable mountain of expenses.  Even with the meter running we can get lost behind the studio doors for weeks, perfecting performances and taking every opportunity to tweak recorded tracks.

The upshot, all too often, is that the release is never released.

That’s why you might want to consider recording a live performance of the band — the way the big boys used to do it. Band plays. Band records. Band goes home.

There are two basic ways to record a live show. You can capture a performance at a live venue or perform in a studio.

Recording on a live stage has its challenges and its benefits. Even if the venue puts each instrument through the mixer, you’ll need to bring in recording gear and have someone operate it. Ideally the board will have dedicated tracks for each instrument plus a few room mics; this way you’ll have more production control on mixdown. You could potentially use a simple stereo recorder, but finding the “sweet spot” of the room where everyone sounds equal is tough in a band situation. Plus, you lose the flexibility to mix vocals up or guitarists down.

With a multitrack live recording you can also fix some bad notes later or slip in some extra applause — nobody has to know. Another big benefit is that you get crowd interaction in this kind of recording, and the recording captures the band’s energy of playing off the audience. But the band has to really be “on” song after song so that performances are worthy of releasing to fans. Otherwise, that’s a lot of time and money spent for nothing.

Another approach is to take the band into the studio, and record live. That’s just what veteran reggae band No Discipline did recently. A staple of the East Coast New Jersey music scene for over 30-years, the band is co-fronted by guitarist/vocalists Al and Mike Bazaz.

No Discipline’s latest CD, Never Can Get Enough, was completed entirely in just three sessions at R.E.M. Studios.

“In the first session, all the basics for the 15 tracks were recorded,” notes Al. “During the first session, we learned about half the songs on the spot, and then tracked the basics immediately after. There are several different drummers that play live with the band, so during this session each drummer came in at different times and played five songs.

“The very next night, my brother and I reviewed the tracks, cleaned up and overdubbed some guitar parts, and added some keyboards as well,” he continues. “We also redid some lead vocals and added harmony vocals on several tracks.”

Bazaz says that on the third night they mixed, assembled the final order and mastered the record.

He felt the whole process went very smoothly and they had a lot of fun, with very little stress. “The way engineer Robert Melosh tracked these sessions, he was actually mixing as he was going along. In total it was about three 8-hour sessions,” he said. “Due to the fact that we’ve played for so long together as a band, everybody was very used to each other,” Al continues. “This makes the process run smoothly and quickly. Most of the tracks were first-take keepers. Due to people’s busy schedules and life commitments, it was hard to get everyone together for rehearsals. That’s why we learned some of the songs in the studio. The spontaneity of this process helped keep things live and fresh. You don’t know what’s coming next, and that can be cool. You also don’t have time to overthink everything.

“It’s a double-edged sword to do a record this way in that you always want to be tighter and you may have been able to express yourself in a little different way,” Al says. “Over our career, we’ve recorded using many different processes, some of which can be time-consuming and expensive.

“Doing it this way kept it relatively inexpensive and exciting.  After all, it’s live in the studio. This is our 12th full-length CD, and we are very happy with the result. One love.”

Rich Tozzoli is a Grammy-nominated engineer, mixer, producer and composer. He has worked with artists such as Ace Frehley, Al DiMeola and David Bowie, among many more, and is the author of Surround Sound Mixing for ProTools. Rich is also a lifelong guitarist and composer. His work can be heard regularly on FoxNFL, HBO, and Discovery Channel.