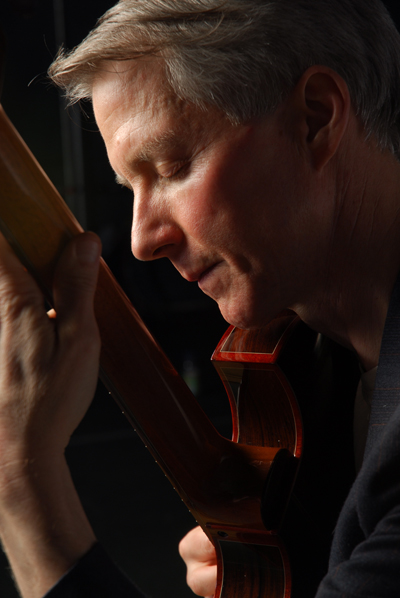 A Life for Music: An Interview with John Stowell

“This is a jazz guitar player speaking about jazz,” said John Stowell.

He sat back in his chair, folded his hands.

Stowell is, by all accounts, a calm man when you’re sitting face to face with him in an office kitchen conducting an interview. But if you bother to peer a little deeper you soon see the intensity – the l’esprit de feu that no doubt drives his playing. Playing that, for lack of a better word, can only be called jazz, but for the better part of 30 years has also been called “daringly original,” “transcending,” and “unique.”

Friends and fans of Stowell all say his playing is as original as he is. That to let his music in, you also need to let in a piece of his spirit; a slow-burning ember that will eventually grow into an inferno. And in the span of 30 years, Stowell has started a lot of fires with his music; bright beacons that lead him all over the world. He says he just tries to be inclusive.

”I want to try to, as quickly as possible, establish a flow of energy back and forth between me and whoever I’m playing for,” said Stowell. “And if we can invite them in, then we can take them on a little journey with us and in some cases ask them to listen to something that’s fairly challenging.”

In many ways, Stowell’s music is challenging. You’d expect that from a master guitarist. But listening to him play leaves the average person scratching their heads with heavy hands of awe, and respect, which unfortunately seems to leave their hands too busy to pick up his records. His music isn’t terrible, it’s hauntingly good, but Stowell challenges you to listen to music in a way that isn’t done anymore – with patience, curiosity and a sense of wonder.

And some would say that’s why John Stowell still has one hurdle: finding his next gig.

The harmonies of jazz are what attracted Stowell to the style. He got his start in Connecticut, before moving to a small town north of New York City in the 1970’s. “Every jazz musician spends some time in New York,” explains Stowell. Looking for more opportunities to perform, Stowell built a tightly knit network of musician friends and started traveling the country to play gigs. His motto and advice is that when an opportunity presents itself, see if you can go with the flow. Eventually, Stowell’s gigs were not only in different towns, but different countries. He hasn’t stopped traveling since. “I don’t have any regrets,” said Stowell. Most musicians Stowell’s age are teaching, have homes, families and responsibilities.  He admits that he knows very few guys in their late fifties who are out on the road as mush as he is. But John Stowell’s only responsibility is his music and that’s exactly the way he wants it, “I’m doing what I have to in order to keep the music out there.”

John’s dedication is slowly paying off. He’s cultivated a small international following which has allowed him to perform on over 4 continents — to audiences of sometimes no more than 50 people. But even when he’s performing in the living room of a fan’s home, Stowell often makes more money than if he had performed in a club. An interesting trend that’s starting to pick up momentum.

But after 30 years, it becomes clear that each gig is still only the beginning for him.

”My goal is to just be the best musician I can be and hopefully have some people enjoy it along the way.” Stowell says, looking out the window. It’s a gray November sky. “I’m not a money maker for anybody. It’s a little grassroots life that I still like enough to keep doing. I don’t have a family, no debt, so I can travel around as much as I want to. But I’m basically surviving on the road from the good graces of friends.” Stowell references an email he received, that basically said if you can find 1,000 fans in the world, you’re fine. I tell him he has a new fan in me. His response is humbling and gracious. Hanging on the wall behind Stowell’s head is a framed print of Van Gogh’s At the Foot of the Mountains (seen right).

“In my case, my goals have been the same for the past 30 years. To be the best player and teacher I can, travel as much as I can, play with as many good players as I can, stay positive, stay ethical, keep going, document my work, record my CD’s and keep it growing,” Stowell said.

There is a famliar allure to Stowell’s life. He has no teather holding him back from his dreams. And perhaps that notion is the little piece of his soul you have to let inside. That is the ember that lights the path. Because to discover John Stowell‘s music, you are discovering what’s really at the end of a road less traveled.

Check out these two beautiful performances by John during his last trip to TrueFire:

“How Deep Is The Ocean”