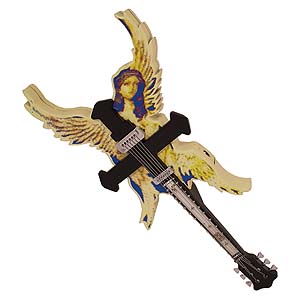 Rock Gets Religion: An Easter Special

Rock & roll and religion: two strange bedfellows if ever there were a pair. Yet, there they are mingling together onstage, not only in the music of “shreddin’ for Jesus” contemporary Christian bands but in the lyrics of mainstreamers from U2 to Switchfoot to Johnny Cash, Van Morrison and Jars of Clay.

Since the early 1970s — around the time Jesus Christ Superstar was a hit rock opera, with Deep Purple vocalist Ian Gillan in the title role — the acoustic guitar in particular has found a second home in the church. It makes sense, given the ties between folk and spiritual traditions. Pious players like Phil Keaggy, Doyle Dykes, Bruce Cockburn and Ed Gerhard could easily make you believe you’d be better off praying for talent than practicing for it. Come to think of it, composers and musicians have been looking skyward for divine inspiration longer than music historians can remember.

The subject is on our brain’s this week as TrueFire rolls out the 2010 Egg Hunt, one of our biggest and best events every year. In case you’ve never hit the hunt, the deals are pretty unreal. It’s a great opportunity to stock up on learning material and enjoy some very cool freebies, and for us it’s a chance to spread the love to players who might not otherwise be able to shell out for some of our lessons. And since it always falls in April, the savings help take a little sting out of tax day. Hope to see you there.

Meantime, here are some related videos to enjoy while you’re dipping that chocolate bunny head in peanut butter. To all of you good eggs out there, and to the bad ones too, happy Easter.

King’s X. The official vid for “It’s Love” (did it ever air?) from Faith Hope Love. If you ever had the chance to catch Ty Tabor ripping on this one live, you know what it sounds like in God’s headphones.

Phil Keaggy from yesteryear, playing an amazing “Amazing Grace” with the e-Bow and some well-placed delay. Check it out…

Killing two birds with one stone here. This our favorite pickin’ preacher, Doyle Dykes, playing a medley of songs by U2 — a group that’s alternately worn and torn religion from its sleeve over the years.

Sinead O’Connor’s 1992 performance on SNL, when she declared war on Pope John Paul II. Wait for it…

And now for something completely different. Ed Gerhard plays the spiritual “Water Is Wide.”

Speaking of Monty Python, we’ll close out with some good advice.