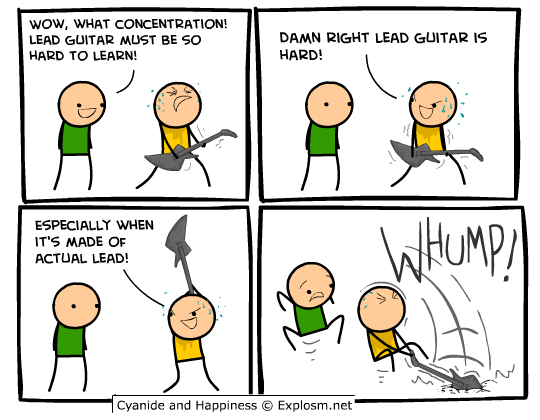 >> Jim Marshall, Legendary Rock Photographer, Passes Away at 74
Jim Marshall, the photographer who captured some of rock & roll’s most unforgettable images including photos of Jimi Hendrix burning his guitar at Monterey Pop and Johnny Cash flipping the bird at San Quentin, died in his sleep last night in New York. He was 74. Read the full article.

>> Failed Guitarist Even Fails at Murder
A 37-year old musician accused of slamming his guitar into his girlfriend’s head, choking her until she passed out and saying, “I’m sorry, but I’ll have to kill you,” was jailed recently. Read the full article.

>> The Precocious Dakota Fanning and Kristen Stewart as The Runaways
Check out what Fanning and Stewart had to say about embodying rock icons and their relationships with their real life counterparts as well as Stewart’s hesitation to retell exactly how Joan Jett explained to rock out on the guitar. Here’s an excerpt from the actually-interesting interview:

Kristen, you play guitar yourself, but did Joan give you any tips on how to really embody the female guitarist?
Stewart: She’s got a really unique connection to the music, the way it comes out of her. The compulsion to make it, to create the sound isn’t something that all musicians have and the fact that she never started playing lead guitar – she wanted to play rhythm guitar, she wanted to keep the music going. So she was always telling me to connect like it’s coming through you and considering your guitar is right here [points to pelvic area], it really is a weird center. The only way that I can describe it and I’ve said it before, is like – she literally sort of told me – it was like – why am I doing this right now? The only way I can describe it and the way she told me to play like her and it’s the only way that feels right is to like – you have to @#$% your guitar. [Turns to publicist] I didn’t know how else to say that. I’m sorry!

Random Inspiration of the Week:

>> The most fascinating guitarist in Africa: Ronnie

Let us know what you think of this video in the comments!

Of the many things Guitar Cubed brings to the table that you might have otherwise dismissed, its major as a key center that might prove to be the biggest revelation to some (I know from my days in the jam session trenches it was all about minor and chugging E strings. Major was just too, well, major sounding! Man, did I miss out!). So far weve explored the muscle rock version of major through Stiff Upper Lip and the lighter jamband side with Granola. Now its time go a little alt-rock/arena rock with Duffys Edge as well as continue to dive into two-chord jams with a jam that exploits the mighty I-V change. Named after its two primary sources of inspiration Billy Duffy of the Cult and The Edge of U2, this jam is major all right—major rock star, that is! Check out the full course by Chris Buono.