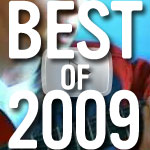 7. The Top 50 Guitar Albums of All-Time – With a lot of help from their readers, Guitar World released in February what they consider to be the 50 greatest guitar albums in rock and roll history. Led Zeppelin IV took the top spot and there were a number of interesting choices. What do you think of the list?

6. The release of It Might Get Loud – The new documentary which was released in August is a love letter to the guitar. Director Davis Guggenheim (An Inconvenient Truth) managed to enlist possibly the most iconic guitar players of three generations—Jimmy Page, The Edge, and Jack White—for what Page calls “an abstract, almost metaphysical” exploration of the instrument’s power. Check out the trailer below:

5. United Breaks Guitars – While Dave Carroll was flying from Nova Scotia to Nebraska he had his Taylor guitar ruined. After a protracted attempt to get United to pay for the damage, Carroll struck back. Here’s Carroll’s saga in his own words (from his personal website): “In the spring of 2008, Sons of Maxwell were traveling to Nebraska for a one-week tour and my Taylor guitar was witnessed being thrown by United Airlines baggage handlers in Chicago. I discovered later that the $3500 guitar was severely damaged. They didn’t deny the experience occurred but for nine months the various people I communicated with put the responsibility for dealing with the damage on everyone other than themselves and finally said they would do nothing to compensate me for my loss. So I promised the last person to finally say “no” to compensation (Ms. Irlweg) that I would write and produce three songs about my experience with United Airlines and make videos for each to be viewed online by anyone in the world.” Here’s the first of Carroll’s songs, which went viral in 2009 and has received millions of views on YouTube:

4. Amazing One-Armed Guitarist – Marc Playle was born in South Shields, England, UK in 1985 and first took an interest in playing guitar at the age of 14. Having a missing left forearm, Marc had to experiment to figure out the best way he could be able to play guitar. After many ideas such as taping guitar picks to his arm and using socks, he came up with the idea for a player which is a cast of his arm that was then made from acrylic resin. It has lots of features that enable him to do most techniques on the electric guitar such as a cut out for palm muting and pinch harmonics, a part of a guitar pick for picking, and a cut out of a leather belt used for tapping. In 2008 he entered an online guitar competition, Guitar Idol 2008, and was chosen as one of the 12 finalists out of 750 guitarists from across the globe. Marc recieved even more attention in 2009, and you can see him shred below:

3. Jason Becker – By the age of 20, Jason Becker was already a guitar legend—but after being diagnosed with ALS, he lost his mobility and was told he would have just several years to live. 20 years after that awful diagnosis, this inspiring man is still going strong and creating beautiful music. “Not being able to play guitar anymore has made me focus more on beautiful melodies and soul stirring stuff,” he told Guitar World. “Now I want people to feel something so deep that they can’t help but reflect and make positive changes in themselves.” To see more about this truly inspirational story, check out the ABC News special below:

2. The Beatles: Rock Band video game – Four decades after dissolving in acrimony, The Beatles emerged again as a heart-throbbing sales and creative force. A $260 box set of the band’s remastered stereo recordings has sold 127,000 copies since its Sept. 9 release, and remasters of four albums and a hits collection were among the year’s 200 best-selling albums, according to Nielsen SoundScan. The Beatles: Rock Band, a high-profile entry in the video-game franchise, sold a respectable 823,000 copies in less than three months, according to the NPD Group.

1. Les Paul Dies – Someone once said, “Without Les Paul, we would not have rock and roll as we know it.” Those sentiments were echoed across the globe when guitar virtuoso Les Paul died in August at the age of 94. Paul was known for his innovative multi-track recording techniques; for designing the solid body electric guitar; and for his string of hits with his wife and singer Mary Ford. But really, Les Paul is bigger than just the man and he will live on forever through his guitars, his legend, and his music. Check out Rich Maloof’s touching Les Paul memoir.

What were some other top guitar stories from the past year? Share in the comments!